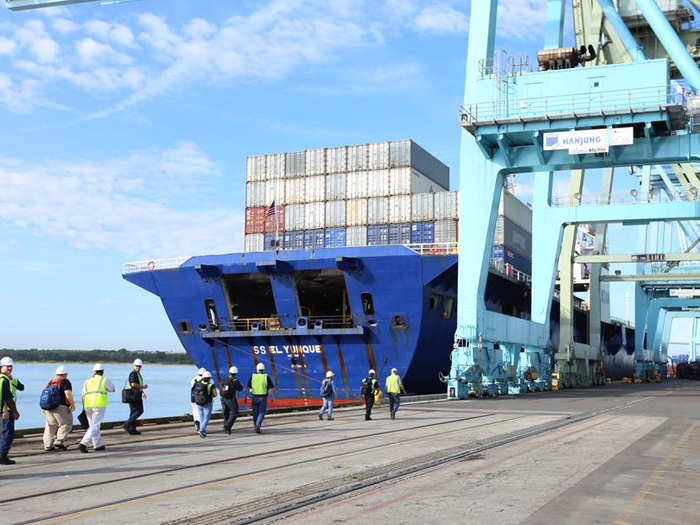 Both ships were built at Sun Shipbuilding & Dry Dock in Chester, PA. The El Faro was delivered in 1975 and the El Yunque in 1976

At a final on-scene briefing in Jacksoville, FL, on October 8,  NTSB Vice Chairman Bella Dinh-Zarr, stressed that the NTSB investigation is still at the fact gathering stage.

Yesterday, NTSB issued its preliminary report on its investigation.

The agency says the information in the report is preliminary and will be supplemented or corrected during the course of the investigation.

Following is the text of the preliminary report:

On Thursday, October 1, 2015, about 07:15 a.m. eastern daylight time, the US Coast Guard received distress alerts from the 737-foot-long roll-on/roll-off cargo ship El Faro. The US-flagged ship, owned by Sea Star Line, LLC, and operated by TOTE Services (TOTE), was 36 nautical miles northeast of Acklins and Crooked Islands, Bahamas, and close to the eye of Hurricane Joaquin. The ship was en route from Jacksonville, Florida, to San Juan, Puerto Rico, with a cargo of containers and vehicles. Just minutes before the distress alerts, the El Faro master had called TOTE’s designated person ashore and reported that the ship was experiencing some flooding. He said the crew had controlled the ingress of water but the ship was listing 15 degrees and had lost propulsion. The Coast Guard and TOTE were unable to reestablish communication with the ship.

Twenty-eight US crewmembers and five Polish workers were on board.

The Coast Guard deployed helicopters and search vessels to the ship’s last known position, but the search was hampered by hurricane-force conditions on scene. On Sunday, October 4, a damaged lifeboat, two damaged liferafts, and a deceased crewmember wearing an immersion suit were found. On Monday, October 5, a debris field and oil slick were found, and the Coast Guard determined that the El Faro was lost and declared the event a major marine casualty. The Coast Guard suspended the unsuccessful search for survivors at sundown on Wednesday, October 7.

On Tuesday, October 6, the National Transportation Safety Board launched a full team to Jacksonville to lead the federal investigation in cooperation with the Coast Guard, the American Bureau of Shipping (the El Faro’s classification society), and TOTE as parties. The US Navy Salvage and Diving division of the Naval Seas Systems Command was contracted to locate the sunken ship, assist in the sea floor documentation of the wreckage, and recover the voyage data recorder.

OCTOBER 16, 2015 — The National Transportation Safety Board is continuing its investigation of the El Faro incident and last week its inspectors boarded the vessel’s sister ship, the El Yunque.