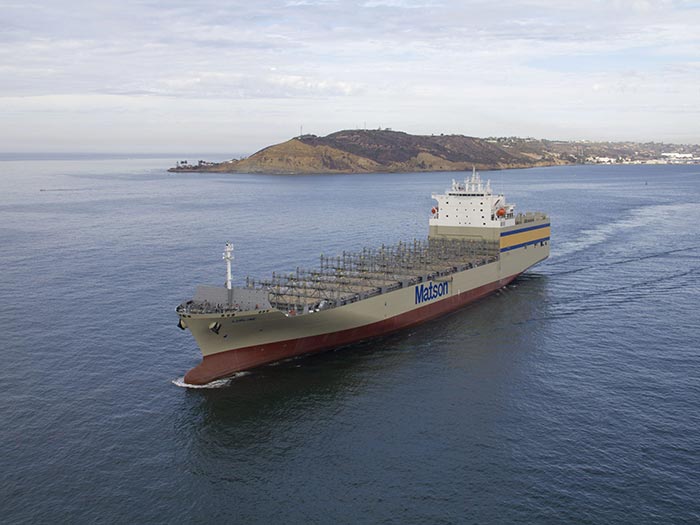 Christened Lurline, the new ship is the first of two Kanaloa Class ConRo vessels being built for Matson by NASSCO at a total cost of approximately $500 million for the pair, and the third of four new vessels that Matson is putting into service between 2018 and 2020.

Lurline will make its maiden voyage to Hawaii next month, departing Oakland and Long Beach on January 9 and January 11, respectively, and arriving in Honolulu on January 15.

The 870-foot-long, 3,500 TEU Lurline provides the capability to transport containers, automobiles, trailers and rolling stock. The garage provides four decks for up to 800 autos, two decks for trailers and features a stern quartering ramp.

At 870 feet long, 114 feet wide (beam), and with a deep draft of 38 feet, the 59,522 grt, Lurline is not only now Matson’s largest ship but one of the company’s fastest vessels, with a top speed of 23 knots, helping ensure on-time deliveries in Hawaii from Matson’s three West Coast terminals in Seattle, Oakland and Long Beach.

Under the latest IMO requirements for engine manufacturers, Tier 3 engines reduce the levels of particulate emissions by 40 percent and nitrogen oxide emissions by 20 percent, as compared to Tier 2 standards.

“We are proud to deliver the lead ship of the Kanaloa Class,” said Dave Carver, president of General Dynamics NASSCO. “It is an honor for our design and production teams to work on the latest Jones Act vessels that will support our customers and the communities they serve.”