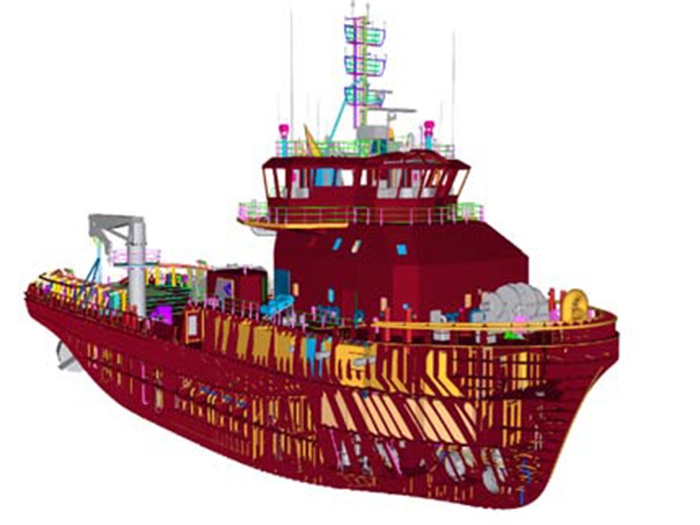 NOVEMBER 8, 2017 — As part of its Shipyard 4.0 Digitalization Strategy, Spanish engineering and technology group SENER has upgraded its FORAN CAD/CAM/CAE system. The improvements in the various design packages are incorporated in the latest FORAN build, launched last month.

The surface ship model, managed as a collection of NURBS patches, is now internally represented by a shell in accordance with the new geometrical kernel of FORAN. There are new surface validation tools, aligned with the demands of the structure discipline, and new functions for automatically identifying and resolving tolerance issues.

The naval architecture package has been enhanced with tools for reading the previous “classic” intact and damage stability definition files, making it possible to reuse legacy projects on the new platform, and includes new stability criteria, more flexibility for configuring reports, and different visualization and user interface improvements.

Among the new capabilities in Hull Structure are the optimization of the structure standards, and improvements in the nesting processes through the incorporation of a new scrap management function to allow more rational reuse of nesting remnants. In addition, this application includes new lead-in/lead-out possibilities and a new function for the manual definition of the cutting start point of each part. Following the openness strategy in FORAN, imported structure parts in DXF files can now be treated by the FORAN build strategy application and nested accordingly.

In the area of Machinery & Outfitting, important enhancements include the new possibilities for the automatic identification of supports, and an extension of the HVAC supports function for duct fittings. In addition, other innovations allow the optimization of automatic drafting tasks in FORAN.

The new release has a more flexible definition of model-based security. Additionally, the FORAN-PLM bidirectional integration has been enriched with the publication of new FORAN attributes and with other enhancements in the “publishing process”, i.e. from FORAN to the PLM tool. The efficiency of this process has been also improved by introducing new internal lock, store and delete mechanisms in the FORAN outfitting applications.

The new build, along with the implementation and update procedures and documentation, is available to FORAN customers through FORAN Cloud Service.