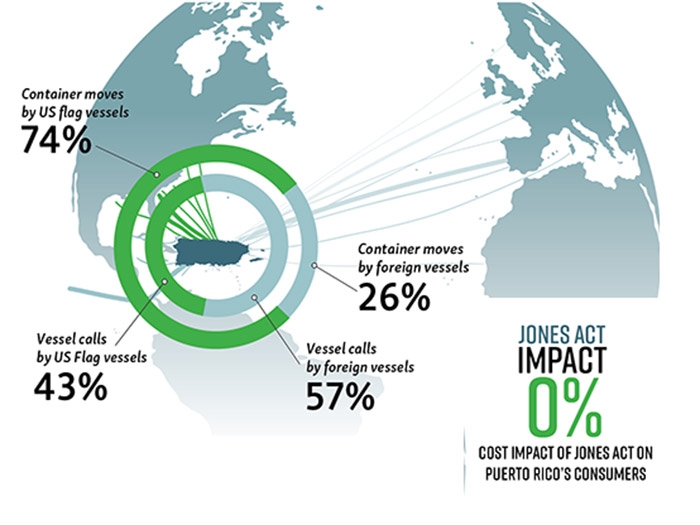 JULY 18, 2018 — Economists from Boston-based Reeve & Associates and San Juan-based Estudios Técnicos, Inc. today released a joint report, “The Impact of the Jones Act on Puerto Rico,” that concludes the Jones Act has no impact on either retail prices or the cost of living in Puerto Rico. In addition, the report found that the state of the art maritime technology, Puerto-Rico focused investments, and dedicated closed-loop service offered by Jones Act carriers provide a significant positive economic impact to the island, at freight rates lower or comparable to similar services to other Caribbean Islands.

“There has been much debate about the impact of the Jones Act on Puerto Rico, particularly following Hurricane Maria,” said John Reeve, the principal in Reeve & Associates and the lead economist on the study. “The findings of our analysis show that reliable, efficient, and regular Jones Act services benefit consumers and businesses on the island, and no evidence suggests that exempting Puerto Rico from the Jones Act would reduce consumer prices in Puerto Rico. On the contrary, such an action may well increase prices.”

“The results were overwhelmingly conclusive regarding the economic contributions of the Jones Act to Puerto Rico. Their detailed, fact-based analysis found that Puerto Rico received very similar or lower shipping freight rates when compared to neighboring islands and that the transportation costs have no impact on retail prices on the island,” said Matt Woodruff, Chairman of the American Maritime Partnership. “Moreover, the study found that prior claims and press reports that questioned the value of the Jones Act to Puerto Rico were erroneous and their validity completely undermined when compared to the economic facts at hand.”

In summary, the findings include:

The report found that shipping costs between the mainland and Puerto Rico make up only a small percentage of the retail price. For example, ocean shipping accounts for just 3 cents (or two percent) in the retail price of $1.58 for a can of chicken soup in San Juan. It found that, “[e]ssentially, transportation costs for Puerto Rico are not materially different than those on the mainland.”

A market basket analysis of an assortment of consumer goods at Walmart Stores in San Juan, Puerto Rico, and Jacksonville, Florida, found there was “no significant difference in the prices of either grocery items or durable goods between the two locations.” In fact, retail prices of goods in Puerto Rico are essentially the same as on the mainland.

Finding that 57 percent of San Juan’s port traffic in 2016 was carried on foreign vessels, the report noted that there is “nothing in the Jones Act that precludes foreign-flag vessels from serving Puerto Rico directly from foreign countries.” It concluded that there was strong competition between carriers serving the island, stating that “if cargo owners in Puerto Rico believed that the Jones Act shipping services were adding costs that negatively impacted their business, you would expect to see [an increase in foreign flag shipping].”

There is no Jones Act freight rate premium for ocean transport.

The report flatly refuted assertions in other studies that the negative impact of the Jones Act is $850 million per year, noting that total annual gross revenues for Jones Act shipping services “was substantially below” that level. In other words, “[t]he Jones Act carriers could have provided shipping services for free and… there still would have been a negative economic impact”, according to these studies – which defies logic.