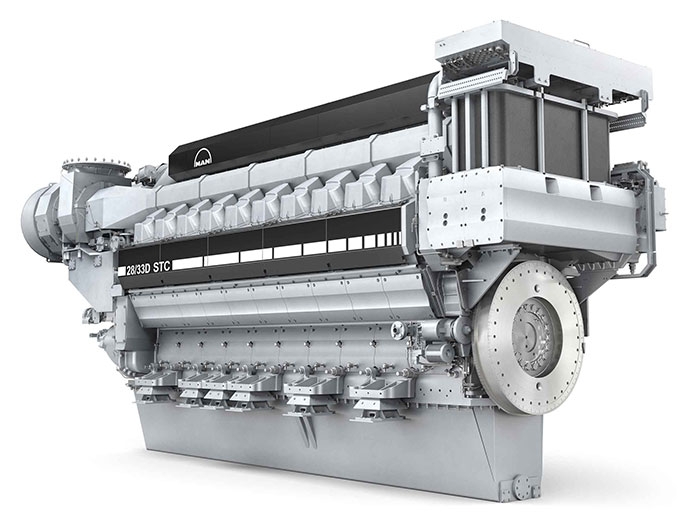 MAY 17, 2016 — India’s Project 17A stealth frigates will be powered by MAN medium diesels.

The Indian Navy has ordered seven of the 149 m guided missile frigates, each equipped with two MAN 12V28/33D STC engines. Construction of the first ship is expected to start by early 2017 with handover to the Indian Navy by 2023. Four of the ships will be built at Mazagon Dock Shipbuilders Ltd. in Mumbai, and three at Garden Reach Shipbuilders & Engineers, Kolkata.

MAN says that the 28/33D STC delivers cutting-edge technology. Featuring robust and reliable engineering it has long overhaul intervals and a maintenance-friendly design that makes it possibile to carry out all maintenance work up to major overhaul without removing the engine from the vessel — extending the operational window of the vessel and reducing maintenance efforts to a minimum.

“We are very proud of this major order for the Indian naval market,” said Lex Nijsen – Head of Four-Stroke Marine – MAN Diesel & Turbo. “It also represents a breakthrough in India for the MAN 28/33D STC. The vessels will be built with new modular construction technique to reduce construction time. A significant share of the scope of supply will be sourced locally and the majority of the engines will be assembled and tested at MAN factory works in Aurangabad, India.”

The vessels will be equipped with state-of the-art technology in order to provide a major advantage to the Indian Navy in terms of anti-submarine warfare capabilities.

The Indian Navy is one of MAN´s long-term customers and is operating a remarkable number of engines on different vessels like submarines, fleet tankers and also frigates in its fleet, which all are being serviced by MAN Primeserv.

The project evolved from the “Make in India” initiative of the Indian Government. As MAN has already produced other engine types in its Aurangabad factory in India for over 25 years, it had the setup ready for localization of its most advanced naval engine. MAN says that by contributing to the plans of the Indian Government, it has once more shown its commitment to one of its most valued long-term customers.