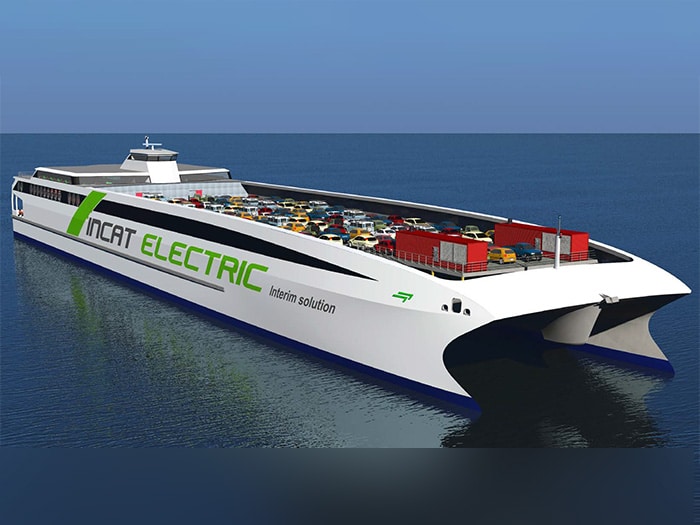 Chairman Robert Clifford, returning from a trip to Europe and the Americas, reports very positive engagement with ferry businesses from around the world, saying “Incat Tasmania led the way in the development of the world’s first car-carrying high speed, lightweight catamarans in the 1990’s and is set once again to revolutionize the fast ferry market.”

Clifford says that Incat already builds aluminum ships that have lower emissions than their steel competitors as aluminum is only a third the weight of steel, meaning vessels require less power and consume the lowest possible amount of fuel already reducing each ships carbon footprint.”

“With the International Maritime Organization (IMO) requiring a 30% reduction in CO2 emissions for newbuilds from 2025 and a reduction of the world fleet’s overall emissions by 40% from 2030, new opportunities are arising on a scale never before experienced,” says Clifford.

After meeting with some of the world’s largest passenger and vehicle ferry companies, Clifford says the appetite for fully electric lightweight ferries is “staggering.”

Back in October, Incat released details of its first concept for a new generation of high-speed lightweight ships, a 148 meter long RoPax ferry with hybrid-electric propulsion that could be transitioned to battery power as shore charging becomes available. Developed in cooperation with ABB and conceived by Revolution Design, Incat’s in house design office, the hybrid-electric ferry, designated the 148E, would be built in Australia to DNV class, operating at speeds of up to 21 knots. It would feature ABB’s Onboard DC Grid power distribution, ABB Ability Power and Energy Management System (PEMS), 800xA distributed control systems, a remote diagnostic system, and two Azipod propulsion units. When shore charging facilities are available, Incat’s project goals envisaging building vessels with an installed battery power of up to 30 MW.

Clifford sees Incat Tasmania’s market reaching a point that will see it doubling or even tripling its workforce, back up to more than 1,500 jobs at its Prince of Wales Bay shipyard with a similar increase in contractors and other support services.

“We will need more employees and possibly even another yard once we reach capacity here at the current site,” says Clifford. “We are also going to need the right strategic advice and support to enable us to grow as quickly as we will need to.”

Helping provide that strategic advice will be former Tasmanian Premier and Climate Change Minister, Peter Gutwein who will join the Incat team in the New Year as strategic advisor.

“As we position the company for significant growth his knowledge and experience will be valuable as we deal with the rapidly expanding low-emission (electric) global market,” says Clifford, adding that, “while we see some competitors continue to construct ships overseas in low-wage economies and with significant incentives offered by some locations, Incat remains committed to manufacturing in Australia.”