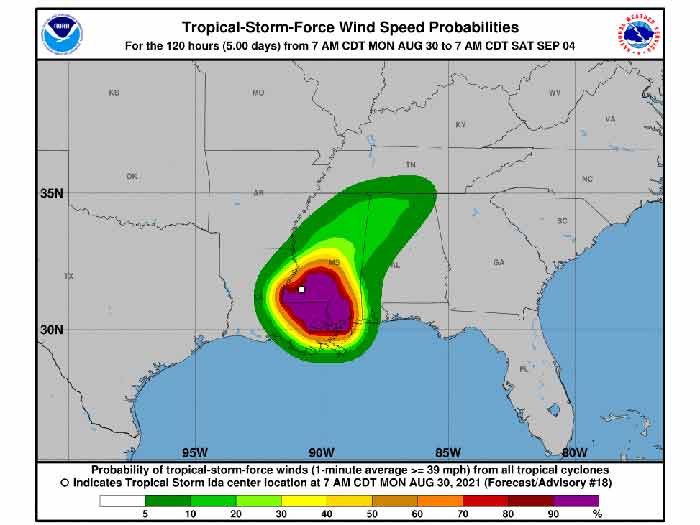 Though Hurricane Ida has now been downgraded to a tropical storm, the National Hurricane Center issued an advisory at 1.00 p.m. CDT today that made it clear that, as Ida moves north-northeastward over Western Mississippi, a heavy rainfall and flash flooding threat is spreading over much of Mississippi, Alabama, and the western Florida panhandle. That could mean more damage yet to come to a swathe of maritime facilities.

Meantime, the New Orleans and Southern Louisiana area has been hit with major damage, power outages, disruption of cellular service, shortages of drinking water and other impacts of the storm that will likely take days if not weeks to address. There have been reports of barge breakaways and at least one incident of a barge smashing into a bridge.

The storm came ashore at Port Fourchon, a hub of the U.S. Gulf offshore energy industry, and the land base of LOOP, the Louisiana Offshore Oil Port, which remained closed Monday along with other ports from New Orleans to Pascagoula, Miss.

Images from Coast Guard overflights give some indication of the situation on the ground.

If there’s any good news, it’s that no federal levee was breached or overtopped.

The Port of New Orleans said this morning that crews are assessing Hurricane Ida impacts and that “initial reports indicate no major damage to our facilities. We are coordinating with navigation partners as well as local and state officials so we can resume operation safely and as quickly as possible.”

Effective on August 28, at 10 p.m. (CDT), the U.S. Coast Guard ordered no vessel movement on the lower Mississippi River from the Gulf of Mexico to river mile 303 (Baton Rouge is at river mile 232; New Orleans is at river mile 100).

As just one example of the impact of the closure the Soy Transportation Coalition notes that the lower Mississippi River is by far the largest export region for soybeans (61%) and corn (58%). During the week ending August 19, 464,138 metric tons of corn, 141,859 metric tonsof soybeans, and 71,696 metric tons of wheat were exported from the terminals along the lower Mississippi River. During the week 487 barges of grain were unloaded in the area.