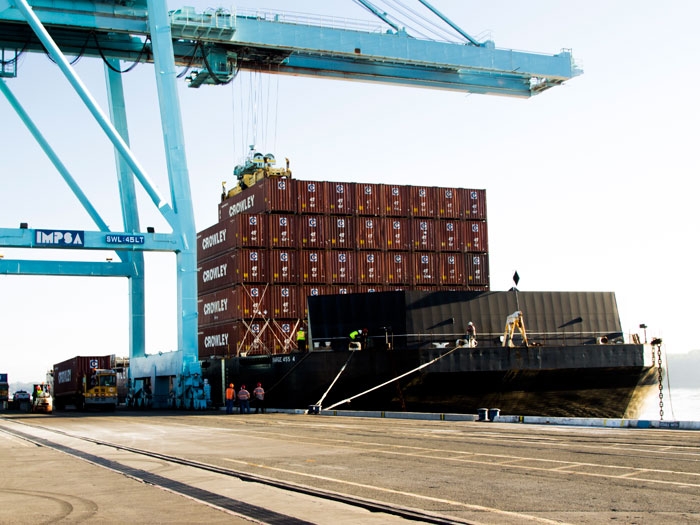 MARCH 20, 2015 — Crowley Liner Services is picking up business as a result of Horizon Lines’ departure from the Puerto Rico Jones Act trade. An important milestone in its response to Horizon’s exit is the introduction of a new flat-deck barge, 455-4, which is capable of carrying up to 400 loads. It is en route to Puerto Rico on its maiden voyage and is scheduled to arrive in San Juan on Monday with a full load of cargo for the island.

Since mid December, Crowley has, through a number of service enhancements, created additional weekly cargo carrying capacity for about 780 loads – or 78 percent the 1,000 loads previously transported by Horizon Lines in an average week.”

Before Horizon left the trade, we had, on average, about 230 empty container slots each week on Crowley vessels,” explained Jose “Pache” Ayala, Crowley vice president, Puerto Rico. “That space has been absorbed by customers. In mid-December, we structurally modified our barge layouts to optimize the stow factor, which generated enough new capacity for another 100 loads a week. Then on Jan. 15, we began running our vessels at an accelerated speed, which increased our frequency of service and weekly cargo capacity by another 250 loads. And most recently, we deployed the new flat-deck barge, which will arrive every other week in Puerto Rico – effectively increasing capacity by 200 loads per week.”

In addition to increasing weekly cargo carrying capacity, Crowley has ordered and begun placing into service more than 6,500 pieces of new cargo handling equipment, including 40-foot, 45-foot and 48-foot high cube containers, 20-foot ISO tanks and a variety of fixed and slider chassis.

When it announced its decision to leave the Puerto Rico trade last November, Horizon Lines said its Puerto Rico business had incurred substantial cumulative losses and negative cash flows in recent years, despite ongoing efforts to remain competitive. Horizon had been serving the trade with two vessels built in the early 1970s that it said had become increasingly costly to operate and expensive to maintain.

“We completely understand that there has been some stress on the island’s supply chain given the abrupt departure of Horizon Lines from the market,” said John Hourihan, Crowley senior vice president and general manager. “We have responded aggressively to replace the void they left, and are confident that current concerns will be short lived and that the island’s overall supply chain will be back to normal very soon.”

For the new barge 455-4 now en route to San Juan, Crowley took great measures to ensure the vessel would accommodate the size and type of equipment most popular in the Puerto Rico trade.

Crowley engaged its naval architecture and marine engineering firm, Jensen Maritime, to reconfigure 455-4, which was originally outfitted for heavy deck cargo transportation, to handle 20′, 40′, 45′ and 53′ containers.

Crowley has been serving the Puerto Rico market since 1954, longer than any other carrier in the trade. The company, with nearly 200 Puerto Rico employees, is also the No. 1 ocean carrier between the island commonwealth and the U.S. mainland with more weekly sailings and more cargo carried annually than any other shipping line.