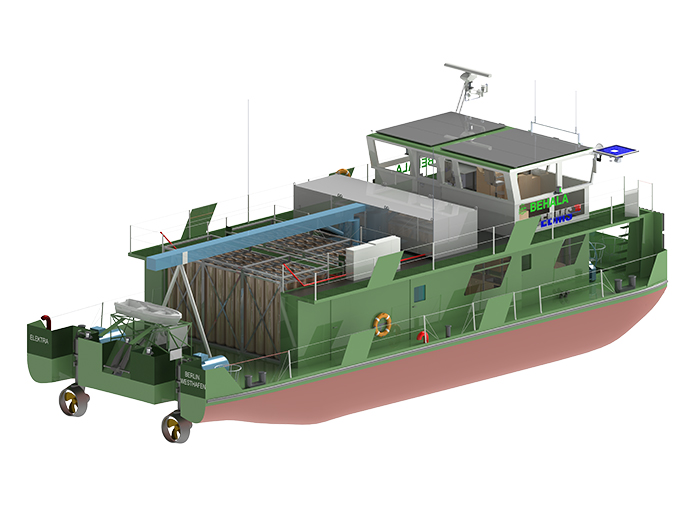 The energy supply on the almost 20 m long and 8.20 m wide push boat will be provided solely by gaseous hydrogen, fuel cells and rechargeable batteries

Construction is to start next month on what Berlin, Germany, based port and logistics specialist BEHALA says will be the world’s first zero-emission push boat.

The energy supply on the almost 20 m long and 8.20 m wide push boat will be provided solely by gaseous hydrogen, fuel cells and rechargeable batteries,

To be named Elektra, it will be used primarily to transport of goods between Berlin and Hamburg and on inner-city transport routes in Berlin. Its primary transportation role will be carrying Siemens turbines, which have to be shipped from their production site in the center of Berlin to the Western Harbor or to Hamburg.

The vessel will be built at the Hermann Barthel shipyard in Derben, Germany, with completion set for the fourth quarter of next year

The project is being led by the Department of Design and Operation of Maritime Systems of the Technical University of Berlin.

EST-Floattech says the vessel is being built with with a battery space of 1.4 m x 6 m x 7 m in which its modular GO1050 batteries (2,507 kWh capacity) will be installed,

In parallel with the construction and testing of the Elektra, electricity and hydrogen supply infrastructure installations are being made in the vessel’s inland waterways operating area .

The total project cost will be around EUR 13 million (about $14.4 million) with the German Federal Ministry of Transport and Digital Infrastructure contributing funding of some EUR 8 million (about $9 million.)