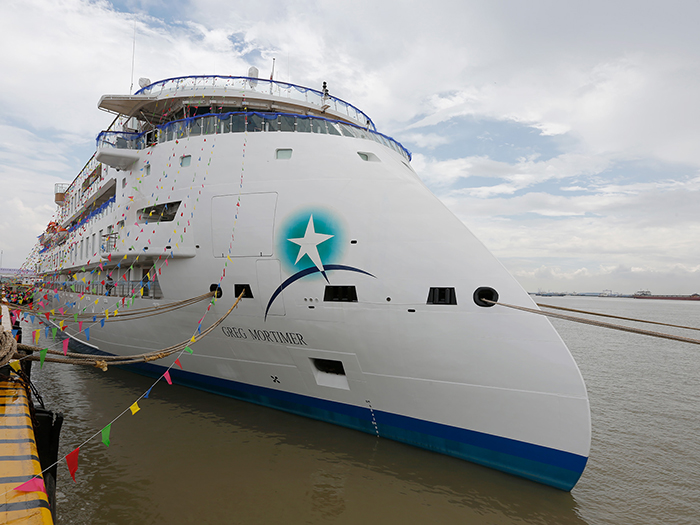 The first in a series of expedition ships being built for Miami headquartered SunStone Ships was named Greg Mortimer in a ceremony held today at China Merchants Heavy Industries (CMHI) shipyard in Haimen China.

Named in honor of Greg Mortimer, the founder of its charterer, Aurora Expeditions, the ship is the first in a series of Infinity class vessels designed and developed by Norway-based Ulstein Design & Solutions and i is the first expedition cruise ship to incorporate Ulstein’s patented X-Bow.

“The ship design contracts for SunStone Ships were a break-through for Ulstein in the expedition cruise market, and we are excited that our partner, the CMHI shipyard, now has delivered the first Chinese-built expedition cruise vessel. From Ulstein’s side, a strong effort has been put on understanding the demands of passengers and crews to design a vessel that is creating the best possible platform for a lasting experience”, says Tore Ulstein, COO Ulstein Design & Solutions and deputy CEO in Ulstein Group.

The Greg Mortimer is the first of potentially ten Infinity polar expedition cruise vessels for SunStone Ships at the CMHI shipyard, China.

All vessels in the Infinity Class will be customized to each client, as is the case with the Greg Mortimer.

Aurora has been closely involved in the ship project, to ensure the best possible expedition vessel for its purpose and itineraries.

The 104 m ship is built to Polar Class 6 standards and offers 80 passenger cabins with private bathrooms and balconies. Other facilities include a restaurant and a bar, a lecture room, a lounge, a 180-degree indoor observation deck and outdoor viewing areas. After a long day venturing on the ice, the passengers can choose to retreat to the ship’s gymnasium, sauna and spa or one of the two Jacuzzis.

Other highlights include a custom-designed platform for kayakers and divers, a dedicated sea-level Zodiac loading platform, and a mud room for day ventures. Side ports facilitate the loading and offloading of four Zodiacs at the same time.