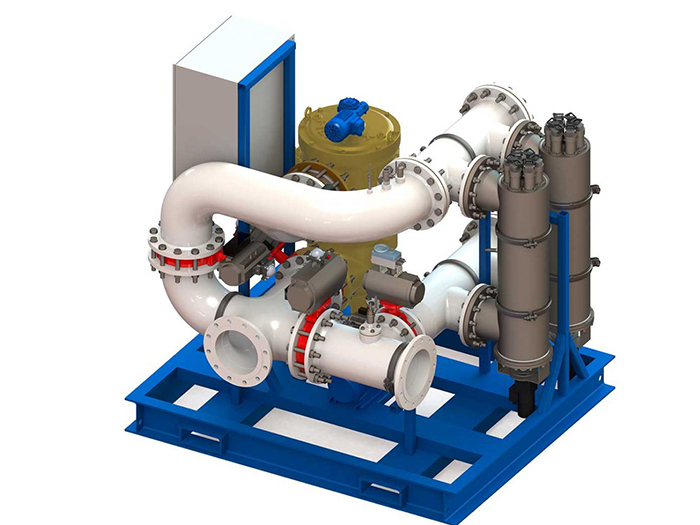 The system has been designed and manufactured by Cathelco, which has been part of Evac Group since May 2018.

“We are delighted to have achieved IMO Approval to the latest standards. It means that customers can have complete confidence in buying our equipment because we have had to prove that our design limitations are accurate and that the system operates reliably in real world conditions,”said Lauri Laaksonen, Chief Technology Officer, Evac Group.

Evac reports that the Evolution BWMS is also well on its way to attaining U.S. Coast Guard Type Approval having been on the pending list since November last year.

New approval is backed by a decade of BWMS experience

This is the second time around the approvals course for Cathelco which received IMO Type Approval for their Mk1 BWMS in May 2014, followed by US Coast Guard AMS Approval six months later.

The latest test program was conducted at the MEA facility in Holland with Lloyd’s Register acting as the independent laboratory working under the flag state regulations of the U.K.’s Marine & Coastguard Agency.

When the U.S. Coast Guard rejected the IMO’s ruling on the acceptability of “viable” life forms (able to reproduce) in favor of “non-viable” (dead) and it became apparent that this would become the universal standard, Cathelco redesigned the system and embarked on another round of testing.

“It was the right decision because we knew that our system would be designed to where legislation was heading and would be flexible enough to comply with future requirements,” Robert Field, Cathelco technical director, explained.

This proved to be the case when the IMO introduced the Ballast Water Management Code which subjected equipment to greater scrutiny in terms of realistic “scaling” in relation to flow rates, sediment loads on filters and closer examination of the efficacy of the system in comparison with holding times.

“Our system has met all of these criteria without compromise,” said Field. “We set the objective of achieving effectiveness down to 55% UVT in all salinities and we have adopted linear scaling which means that it will work on all types of vessels,” he added.

The Evac Evolution BWMS, based on a combination of filtration and UV technology, incorporates a unique feedback “loop” based on the measurement of UV transmission which determines precise dosage. It automatically adjusts to different seawater qualities in harbours and estuaries ensuring the optimum UV dosage is applied at all times, but saving on power whenever possible. Effective in fresh, brackish and seawater it is available in capacities from 34 cu.m/h to 1,500 cu.m/h in a single unit. Systems can be supplied skid mounted or in modular form for easier installation in confined areas.