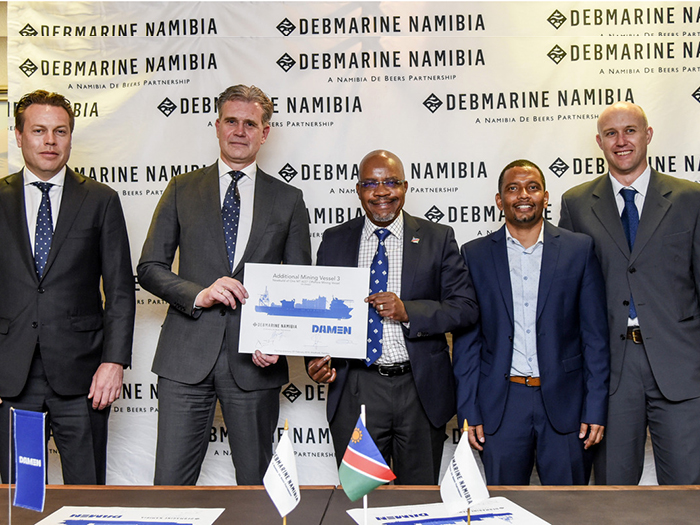 According to Debmarine Namibia (a joint venture between De Beers and the Government of Namibia), the vessel is expected to cost $468 million and is the largest ever single investment in the marine diamond industry. On completion, the vessel is expected to add 500,000 carats annually to Debmarine Namibia’s production, an increase of approximately 35% on current production.

At 177 meters (577 feet) long, the new vessel will be slightly larger than the current largest vessel in the Debmarine Namibia fleet, Mafuta (174 meters, 571 feet). Built to a Marin Teknikk design, the MT 6027 will be the most technologically advanced marine diamond recovery vessel in the world. On-board features include a dynamic positioning system (DP2) based on a seven-thruster propulsion system powered by six generators of 3,230 eKW each.

Damen says that the order is one of several opportunities generated by its Mangalia shipyard.The yard has the largest capacity of all Damen’s yards, with a total of three graving drydocks up to 60 m in width and 1.6 km total berthing space. The larger capacity has allowed Damen to take on larger construction projects, such as a 148 m RO/RO vessel, a 155 m long cruise vessel, and this new 177 m offshore mining vessel for De Beers.

“So far, Damen’s newbuild focus has mainly been on standardization and in-house or own design vessels, along with various types of support and service vessels built for the offshore market,” says Damen sales director offshore Ruud van der Stroom. “However, the facilities in Mangalia allowed us to respond positively to De Beers Marine Namibia’s newbuild enquiry: an engineered-to-order project with vessel dimensions beyond that built by Damen ever before.”