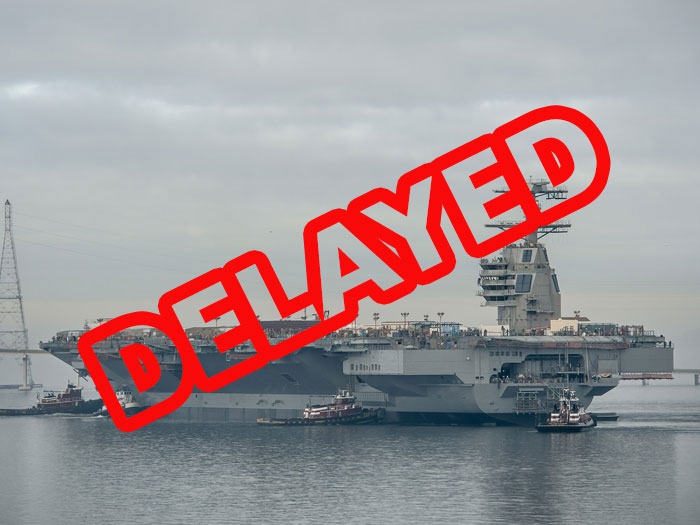 JULY 13, 2016 —  Although the Navy says that Huntington Ingalls is performing well as the shipbuilder, the USS Gerald R. Ford (CVN-78) won’t now be delivered until at least November, more than two years late.

“During the ongoing testing of developmental systems” on the carrier “first-of-class issues are continuing to be resolved,” according to a Navy statement provided Tuesday to Bloomberg News. “The current estimated delivery date is in November 2016. If additional issues arise during the remaining shipboard testing, that date may need to be revised.

“The statement noted that testing is continuing for “the propulsion plant steam and electric systems.”

The U.S. Naval Institute quotes Navy spokeswoman Capt. Thurraya Kent as saying that “during the ongoing testing of developmental systems onboard the CVN-78, first-of-class issues are continuing to be resolved” and Naval Sea Systems Command spokeswoman Colleen O’Rourke as saying that no one system caused the delay, but rather the Navy and shipbuilder are “working through some first-of-class issues” generally.

The ship was originally planned to deliver to the Navy in March 2016. That was pushed back by six to eight weeks, as announced in September 2015, due to “deterioration” in progress that would cause a slip in the ship’s test schedule.

He released the following statement:

“The Navy’s announcement of another two-month delay in the delivery of CVN-78 further demonstrates that key systems still have not demonstrated expected performance. The advanced arresting gear (AAG) cannot recover airplanes. Advanced weapons elevators cannot lift munitions. The dual-band radar cannot integrate two radar bands. Even if everything goes according to the Navy’s plan, CVN-78 will be delivered with multiple systems unproven.

“This situation is unacceptable and was entirely preventable. The Ford-class program is a case study in why our acquisition system must be reformed – unrealistic business cases, poor cost estimates, new systems rushed to production, concurrent design and construction, and problems testing systems to demonstrate promised capability. After more than $2.3 billion in cost overruns have increased its cost to nearly $13 billion, the taxpayers deserve to know when CVN-78 will actually be delivered, how much developmental risk remains in the program, if cost overruns will continue, and who is being held accountable.

“The Senate-passed defense authorization bill holds the Navy accountable for the Nunn-McCurdy critical breach that currently exists in the AAG program as a result of more than $600 million in cost overruns. As the Department of Defense Inspector General reported last week, ‘Ten years after the program entered the engineering and manufacturing development phase, the Navy has not been able to prove the capability or safety of the system to a level that would permit actual testing of the system on an aircraft carrier…’ Returning to a variant of the Mark 7 arresting gear is a viable option that must be considered during the Nunn-McCurdy review.”