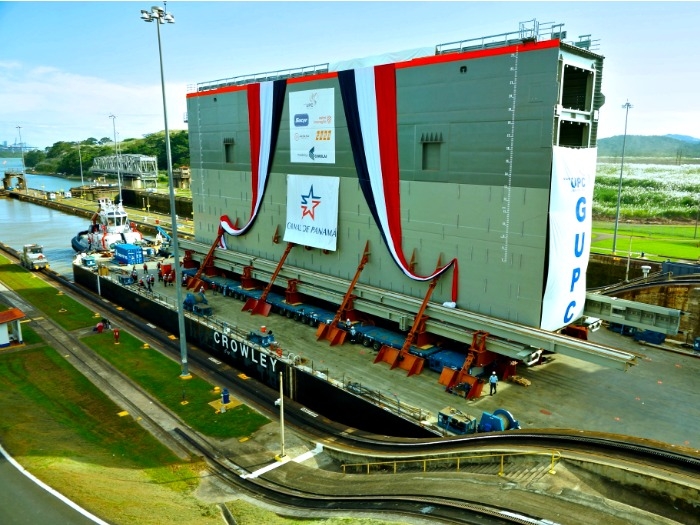 OCTOBER 25, 2014—Crowley Maritime Corporation’s 400-foot-long by 105-foot-wide heavy lift barge 455 4 recently transported the first of eight gates for the Pacific side of the ongoing Panama Canal expansion. At 22 meters high and 2,300 tons, the first gate is actually the smallest. The new gates on average will weigh 3,400 tons and the tallest will be 33 meters high—as tall as an 11-story building.

The 455 4 was designed and built specifically for big jobs such as this. The barge was contracted by Sarens, a Belgium-based heavy lift company, to transport the gates from Cristóbal, a port on the Atlantic side of the Canal, to Grupo Unidos por el Canal, SA’s (GUPC SA) construction dock, which was built to receive the gates on the canal’s Pacific side. The 105-foot wide barge, currently the largest capable of transiting the Canal, was towed by Panama Canal Authority (ACP) tugs and made the transit in only one day.

The 455 4 is one in a series of eight high deck strength barges in Crowley’s fleet able to handle uniform loads up to 4,200 pounds per square foot. In cooperation with Sarens and the Panama Canal Authority (PCA), the barge is scheduled to transport another gate this month, followed by three more in both November and December.

Prior to the move, Crowley’s Seattle-based marine engineering and naval architecture firm Jensen Maritime, worked with Sarens to perform a professional peer review of Sarens’ strength and stability calculations related to the barge and voyage.

Since August 2013, the gates have been arriving in staggered shipments from Italy on a Post-Panamax vessel to a temporary dock in the Atlantic side. The first shipment arrived on August 20, 2013. The second and third shipment arrived on June 10, 2014 and September 7, 2014, respectively. The last shipment has already departed from Italy and is expected to arrive in November 2014.

The new locks will have 16 rolling gates, eight in the Pacific and eight in the Atlantic. The gates were fabricated in Italy by Cimolai SpA.

During the next two months, the remaining seven gates that belong to the new locks in the Pacific will be transiting one by one through the Panama Canal.

The Panama Canal Expansion is 80 percent complete. It consists on the construction of a third lane of traffic allowing the passage of bigger vessels, which will double the Canal’s capacity and have an important impact on world maritime trade.