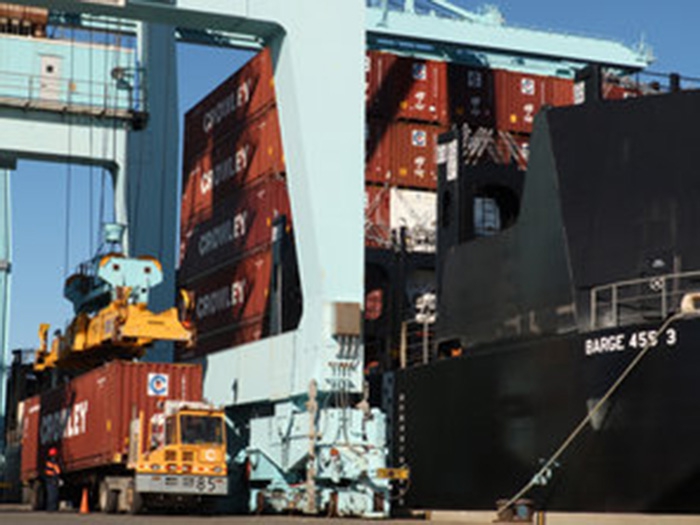 With the 455-3 sailing early Tuesday morning from the Port of Jacksonville, Crowley has now expanded its fleet from nine to 16 vessels, further increasing U.S. flag capacity to transport commercial and relief supplies to support the island’s recovery after Hurricane Maria in late September.

The 455-3 is carrying nearly 300 loads of FEMA and commercial cargo.

The flat-deck barges have been outfitted to carry stacked shipping containers on deck. This lift-on/lift-off (Lo/Lo) shipping operation was made possible by Crowley’s recent terminal upgrades at Isla Grande terminal, which included the construction of a new pier and installation of three new container cranes.

“A tremendous amount of engineering and thought was put into the design of the lash bridge securing system to enable us to maximize our container lift,” said Cole Cosgrove, vice president, marine operations. “These advances will provide support for Puerto Rico now in a time of need, and continue to serve the island as part of our long-term strategy.”

The design was created in-house by Crowley’s marine engineers and naval architects, and the build was executed by VT Halter Marine shipyard in Pascagoula, Miss. The project started at the end of 2016 in preparation for Crowley’s transition to a Lo/Lo operation in the Northeast and to supplement the South Atlantic peak shipping season, which normally starts in October and continues through early December.

“We worked with the shipyard to achieve an early completion of the two barge conversions, which allowed us to add over 900 units of capacity to the Puerto Rico service during the critical relief effort following hurricanes Irma and Maria,” said Cosgrove. “In addition to the two Crowley barges, we have added five U.S.-flagged flat-deck tug and barge combinations to our fleet since the storm. Altogether, the additions to our fleet represent a 67 percent increase in capacity, which is allowing for almost daily sailings between the mainland and San Juan.”

Even with the unprecedented levels of cargo being transported by Crowley and other U.S.-flag carriers, pick-up of containers continues to lag in the Port of San Juan, as does the return of empty containers to support the flow of supplies to store shelves and distribution centers. Crowley is working with government leaders and representatives of the food, retail and manufacturing industries to support the recovery of their business operations and supply chains, which remain negatively impacted by damage on the island.

“The record capacity that we have added is sending valuable goods and supplies to the island – it all helps with the relief,” said Jose “Pache” Ayala, vice president, Crowley Puerto Rico Services. “As companies continue to return to normal pick-up levels for goods and supplies, we know the island’s recovery can continue to gain momentum.”

“We have also added over 5,000 additional containers and hundreds of additional chassis to the Puerto Rico fleet to alleviate slower equipment turn times,” said Ayala. “Our equipment control team has been working around the clock to identify any available equipment east of Chicago.”