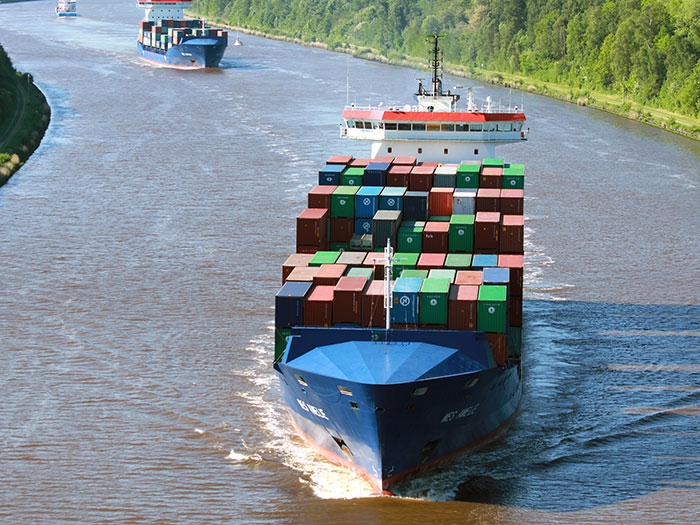 Gerd Wessels said: “This pioneering project marks a milestone in the European container feeder market, and MAN has impressively proven that existing engines can be converted to LNG operation with a tremendous effect on exhaust emissions and the environment.”

The project involved the retrofitting of the ship’s MAN 8L48/60B main engine to a multi-fuel, four-stroke MAN 51/60DF unit that enables dual-fuel operation – the world’s first such conversion of its type.

Christian Hoepfner, General Manager of Wessels Reederei, said: “The Wes Amelie operates in the highly regulated Nordic and Baltic Seas. Since they are both within Emission Control Areas, the ship needs to meet the highest environmental standards and strictest limits for emissions. By converting to a low emission fuel, we are safeguarding the future of this containership as well as our own competitiveness in the market.”

“By providing customers with the technology to retrofit their existing fleet, we are driving what we call the maritime energy transition,” says Dr. Lauber. “There are roughly 40,000 cargo vessels in operation worldwide. If we are serious about decarbonization and want the shipping industry to be climate neutral by 2050, we need to take action today.”

The dual-fuel conversion has enabled the ‘Wes Amelie’ to significantly reduce its SOx emissions by >99%, NOx by approximately 90%, and CO2 by up to 20%. The vessel now meets both the Tier II and Tier III emission requirements set by IMO.

Works were carried out at the German Dry Docks shipyard in Bremerhaven in cooperation with gas-specialist, TGE Marine Engineering, which provided tank and LNG components. Bureau Veritas classed the conversion.

In selecting a suitable vessel for conversion, special attention was paid to the scalability of the engineering services as well as the development costs, significantly reducing the costs for follow-up projects. The Wes Amelie has 23 sister ships, 16 of them structurally identical, allowing follow-up projects to be easily implemented.

The ship therefore facilitates a multiplier effect, with multiple, other, “conversion-capable” vessels also found around Europe.