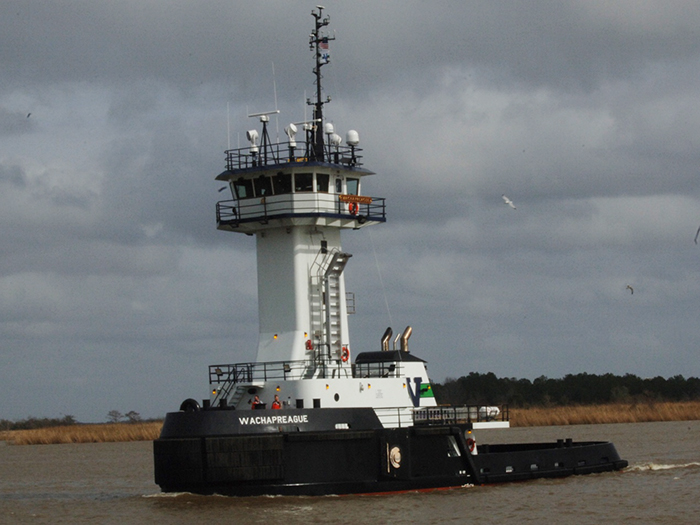 Morgan City, La., based Conrad Shipyard has delivered the third in a series of identical Articulated Tug Barge units, designed by Greg Castleman of Castleman Maritime, to the Vane Brothers Company, Baltimore, Md.

The 110-foot Wachapreague, named for a city on the Eastern Shore of Virginia, has a breadth of 38 feet and a design draft of 15 ft 4 in. She has accommodations for a crew of ten and is powered by two Tier III compliant, 2,200 hp Cummins QSK-60M diesel engines turning two Hung Shen, 102-in by 79-in four bladed, fixed pitch, bronze propellers via Reintjes WAF 873 7.087:1 ratio reduction gears.

The tug and barge are linked by a Beacon-Finland JAK 700 coupler system.

Double Skin 803 has an overall length of 403 feet, beam of 74 feet and overall depth of 32 feet. The barge is equipped with bow thrusters and thermal heaters for its cargo of asphalt.

“It is always rewarding to deliver new vessels to a repeat customer like Vane,” said Conrad Shipyard Chairman and CEO, Johnny Conrad. “The Vane team is great to work with, and this ATB is representative of the quality, craftsmanship, integrity and service consistently delivered by our extraordinary shipbuilding team. We appreciate Vane Brothers’ continued confidence in Conrad Shipyard.”