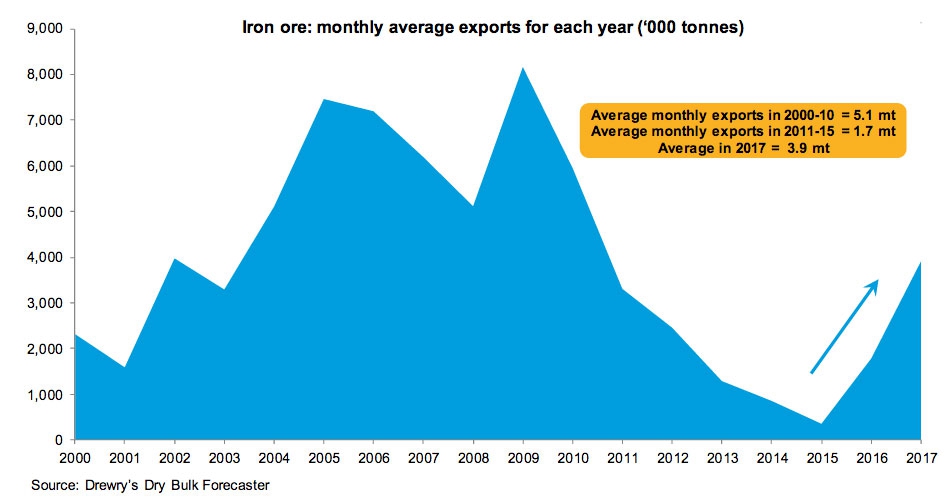 AUGUST 2, 2017—There hasn’t been much of a silver lining for shipping as of late, but international shipping consultancy sees one in the latest forecasts for rates in the dry bulk shipping sector.

According to Drewry, charter rates in dry bulk shipping will continue to recover with firm demand and controlled fleet growth. Drewry unveils its findings in its latest edition of the Dry Bulk Forecaster.

Drewry revised its charter rates forecast in the short term as the date to implement ballast water management systems (BWMS) was postponed by two years until September 8, 2019. As a result of the BWMS implementation postpone, Drewry lowered its forecast for demolitions that will eventually support fleet growth. Despite the increased fleet supply, charter rates will strengthen because demand will grow faster. The recovery in rates will become more prominent in 2019 and 2020, when the IMO regulations will be implemented.

Tonne mile demand will grow at a healthy pace of around 3% annually over the next five years while fleet supply is expected to expand at a rate of just 1% a year over the same period. The slowdown in fleet growth can be credited to low deliveries because of a thin orderbook and high demolitions resulting from the upcoming environmental regulations.

Demand will improve with the strengthening of iron ore, coal, grain and minor bulk trades. The rise in infrastructure activities in China will support imports of iron ore and other minor bulk commodities.

“We believe India’s return to the seaborne iron ore market will have wide implications for the dry bulk trade in the coming quarters. Iron ore exports from India to China that resumed at a fast pace, could reclaim a part of their lost share from Brazil and Australia,” says Rahul Sharan, Drewry’s lead analyst for dry bulk shipping.

Drewry believes increased iron ore exports from India will provide additional employment opportunities to Supramax and Panamax fleets, and marginally to the Capesize fleet. “Many Indian ports have been dredged further to accommodate Capesizes, but a large part of the ore will still be carried on smaller vessels, providing employment and higher utilization to smaller segments,” says Sharan.