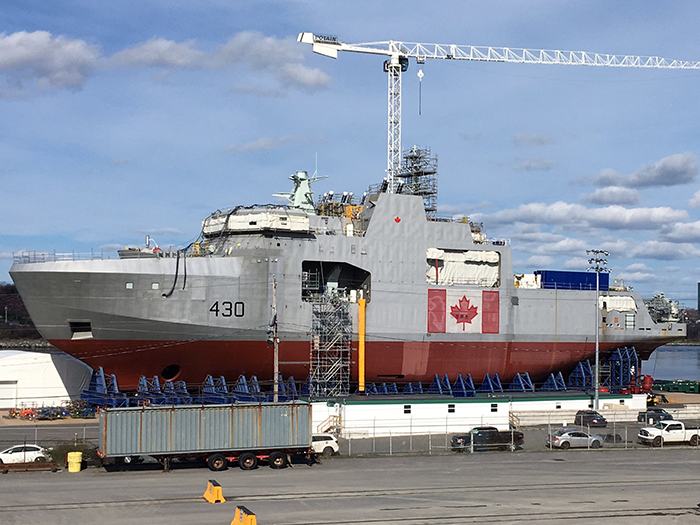 AOPS under construction at Irving Shipbuilding (photo by WayeMason)

Canada is to invest up to C$15.7 billion (about US$11.7 billion) to add up to 18 new large ships to the Canadian Coast Guard fleet.

The ships will be built at the two shipyards designated to build large ships under Canada’s National Shipbuilding Strategy (NSS), Seaspan’s Vancouver Shipyards and Irving Shipbuilding of Halifax, Nova Scotia.

THIRD YARD TO BE ADDED TO NATIONAL SHIPBUILDING STRATEGY CONTRACTORS

Buried away in the middle of today’s announcement from the office of Prime Minister Justin Trudeau, was the disclosure that, “to support future shipbuilding needs and attract more talent and good jobs to our communities, the Government of Canada intends to add a third Canadian shipyard as a partner under the NSS” and will move forward with a competitive process to select the third shipyard in the coming months.

It would be amazing if the yard that emerged from the process was not Canada’s largest shipyard, Chantier Davie of Lévis, Quebec,

The C$15.7 billion funding for the 18 large ships in represents early estimates of project budgets including construction, logistics and support, contingency, project management and infrastructure costs. The costs of each ship will be announced following contract negotiations.

Two of the 18 ships will be new Arctic and Offshore Patrol Ships (AOPS), which will be adapted for the Coast Guard to perform tasks including offshore patrols. These ships will be built by Irving Shipbuilding in Halifax, which is already building the initial three AOPS for the Royal Canadian Navy.

The Government of Canada will also order to 16 Multi-Purpose Vessels to support a variety of missions, including light icebreaking, environmental response, and offshore search and rescue. These ships will be built by Vancouver Shipyards.

The Government of Canada will also proceed through a competitive process with the design of a new class of smaller ships, the new Mid-Shore Multi-Mission Ship, which would complement the work of the large fleet in shallow areas and deliver mid-shore science activities.

Repairs, refits, and vessel life extension work will be carried out on the existing fleet until the new ships are delivered, with over C$2 billion to be invested on a competitive basis for this purpose.

In addition to funding for shipbuilding, the Government of Canada is also providing over C$351 million to support ongoing Canadian Coast Guard capacity enhancements such as strengthening management oversight and promoting innovation and greener practices.