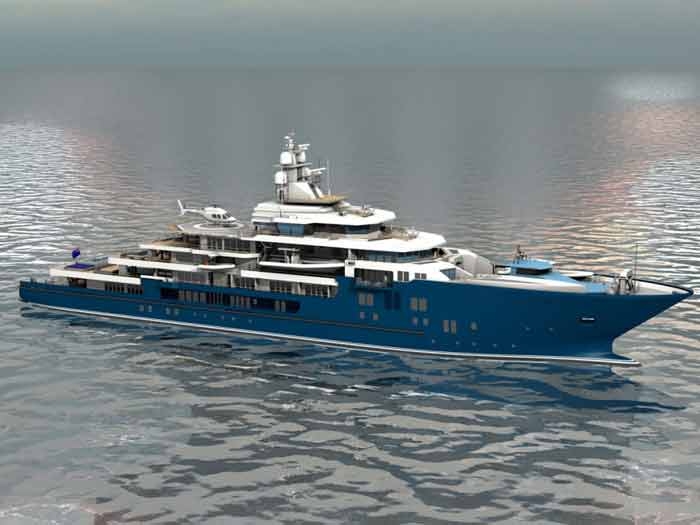 NOVEMBER 28, 2014 — New Zealand billionaire Graeme Hart, who already has one mega yacht on order at Kleven, has awarded the Norwegian shipbuilder an order for a second, even bigger, one.

At 116 m long the Expedition Support Vessel will be almost 10 m longer than the vessel currently under construction at the shipyard.

“Drawing on our extensive experience in building complex offshore vessels, this new vessel type designed and built for Mr Hart serves as a great example of how close cooperation within the Norwegian maritime cluster brings the industry forward and into new markets,” said Ståle Rasmussen, CEO of Kleven.

Mr Hart, who is an experienced yacht owner, has been to the yard a number of times and has followed the building process in Norway closely.

“I am very pleased with the quality of the work that has been done by Kleven, and how our organizations have worked together to bring this exciting project to life. I am very much looking forward to seeing both vessels being finalized,” Mr Hart said.

Marin Teknikk says that, like the first, the new vessel will be equipped with a helicopter deck and a helicopter hangar.

Space and deployment arrangements are provided for five large boats that can be carried on for different excursions. In addition, there will be a hangar for several smaller boats and equipment for water sports.

The latest diesel electric propulsion system technology will be installed and the vessel will be equipped for dynamic positioning to enable it to stay in position for extended periods in remote areas.

The vessel will accommodate 66 people, and will include deliveries from a number of Norwegian suppliers like Rolls-Royce, Hareid Group, Jets and Sperre. It is scheduled for delivery in July 2016. The first vessel is to be delivered in June 2015.