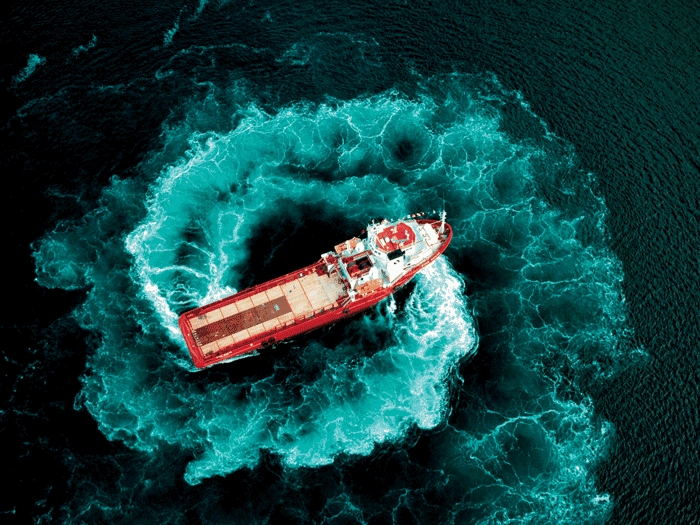 Over the years, the use of azimuth thruster has changed the way operators do business. The increased maneuverability and efficiency gains allow tug operators to do more with the same installed power. Added maneuverability can also play a role in improving safety during certain operations.  With more than 50 years of developing and manufacturing azimuth thrusters, Rolls-Royce has learned a lot about the specific propulsion requirements of different types of ships and floating structures. Working close with the customers has been a key element of the success.

Steerable azimuth thrusters have come a long way since the first one went into service in 1965. With just 80 hp of thrust it was installed on a mud hopper barge in Finland to make it self-propelled. The first azimuth units specifically designed for inland waterway applications were delivered in 1976. They powered a series of three-river push boats built in Holland and are still operating today.

With the aid of modern computer-based design tools and a detailed understanding of hydrodynamics, Rolls-Royce is continuously developing and improving its thruster product range. The current product portfolio covers a power range of 300 to 14,000 hp.

The benefits of Azimuth thrusters on a towboat
With an azimuth thruster the full thrust can be applied in any direction through the full 360 degrees and significantly improve the maneuverability and braking force of the vessel. In performance tests it has been shown that the braking forces produced are nearly 1.5 times those of the conventional towboat, over the whole speed range. This increase in braking force reduces both the distance and the time needed to stop a barge train.

For shallow draft operations, the normal requirement is to fit 2 azimuth units, and it is not unusual to have towboat designs with a triple azimuth thruster propulsion arrangement.

How Azimuth thruster help in Brazil
Brazil is a country traversed by many rivers, the main one being the Amazon. There are 11 main inland waterways with a total length of some 39,000 miles although only approximately 8,000 miles are regularly used. These waterways are used to transport agricultural commodities such as grain and fertilizer, as well as mineral goods to the coast.

Amaggi Navegação a subsidiary of Amaggi Exportação e Importação Ltda. is one of the operators working in the region who has moved to azimuth thrusters to propel their vessels. They have been operating on these waterways for over 20 years and now have over 30 tugs equipped with azimuth thruster propulsion. Units in their fleet include a range of Rolls-Royce thrusters from our smaller US 105 model to our larger US 255’s.

Amaggi Navegacao operate on the Madeira and Amazones rivers where they are involved in the transportation of grain and soya to and from local processing plants. The move away from conventional towboat design has enabled them to increase the size of barge trains, which is due to increased turning and stopping capacity at full load.

llers are used for the majority of these thruster applications due to the amount of debris in the rivers. The trend outside the Amazon is to fit azimuth thrusters with nozzles and thereby maximize thrust.

The future of Azimuth thrusters
Thruster technology continues to develop. The latest is the introduction of gearless electric drive through the application of permanent magnet (PM) rim drive technology, where the motor surrounds the propeller as a slim ring. The rotor is integral with the propeller and carries a series of permanent magnets. As the magnetic fields interact, the propeller turns. Tunnel thrusters and azimuth thrusters utilizing this technology are now available from Rolls-Royce. The compact and efficient tunnel thruster unit is easy to install and power output is increased by around 25% for the same propeller size. It is a good example of the possibilities that lie ahead.

This technology has now been applied to the azimuth thruster by Rolls-Royce, and the first PM development thrusters rated at 670 hp were installed on the research vessel R/V Gunnerus in March 2015. Nozzle shape can be selected to suit individual applications, but since Gunnerus requires pull for towing trawl and other gear, the nozzle is optimized for bollard pull and speed to match the vessel’s requirements. The installation is compact with only the slip ring unit and the variable frequency steering motors inside the hull.

Before the installation, the vessel had a conventional diesel electric propulsion system consisting of frequency converters, induction motors, gears and shaft with nozzle propeller. Testing to date has demonstrated an improvement in propulsive efficiency and bollard pull with a reduction of air and structure borne noise and vibration.