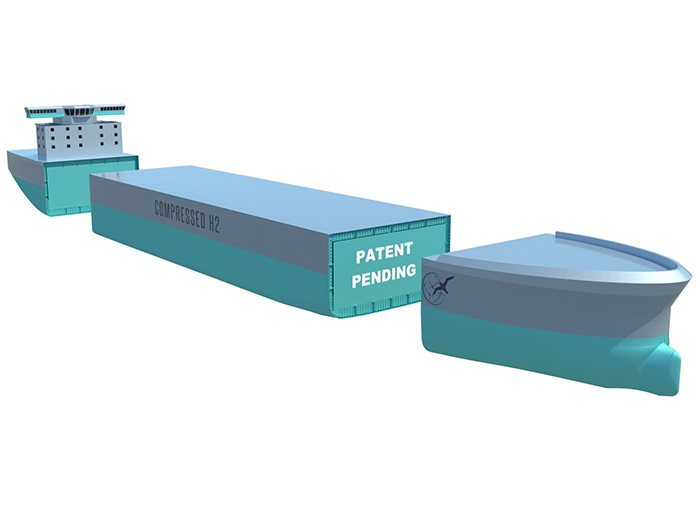 GEV released this illustration of the H2 Ship

Australia last year unveiled a National Hydrogen Strategy that includes the establishment of “Hydrogen Hubs” for production and export to the country’s major energy trading partners across the Asia Pacific region.

To get the hydrogen to those markets, Perth, Western Australia, headquartered Global Energy Ventures Ltd (ASX: GEV) is developing a design for a 2,000 tonne capacity compressed hydrogen ship that it calls the H2 ship.

GEV says that it will leverage its expertise in compressed natural gas (CNG) vessels (see earlier story) and anticipates that detailed engineering will be ready for submission for ABS Approval in Principal by early 2021.

The company says that it is assessing funding options available from Australian Government R&D programs established under a Federal Government commitment of A$1.9 billion to develop renewable technologies.

Maurice Brand, Executive Chairman & CEO commented: “Today we are excited to announce the company’s hydrogen strategy to develop a new class of ship for the marine transportation of hydrogen. GEV sees Australia as the global leader for establishing a national hydrogen strategy and industry with major funding programs in place. Australia has also established future hydrogen export agreements with regional customers in Japan, Korea, Singapore, and most recently Germany.”

“To be focused on a new class of vessel to transport hydrogen is now timely,” he said, “given the global push by governments and major corporates to focus on ‘net-zero carbon’ policies, with hydrogen as a pillar for decarbonizing heavy carbon emission industries.”

He noted that the launch of the compressed H2 ship would not detract from GEV’s focus on the commercialization of its CNG initiatives.

GEV says it expects to receive broad patent protection for the H2 ship.

The containment system will include ambient temperature hydrogen at a target pressure of 3,600 psi (or 250 bar). While the H2 Ship will have a storage capacity of up to 2,000 tonnes (23 million cu.m) of compressed hydrogen, smaller capacity ships will be evaluated by GEV for demonstration purposes based on specific pilot export projects.

With the rapid advancement fuel cell technology for vessels, GEV intends to include engines that burn pure hydrogen, providing a “zero-carbon” shipping solution.