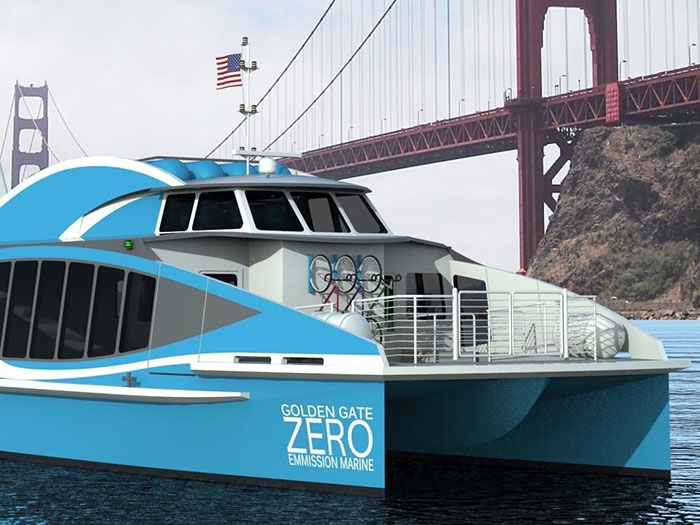 JUNE 25, 2018 — Hydrogen fuel cell marine propulsion is moving from the study phase to practical reality. Golden Gate Zero Emission Marine (GGZEM) has been awarded a $3 million grant by the California Air Resources Board (CARB) to build what will be the first hydrogen fuel cell vessel in the United States — and the first commercial fuel cell ferry in the world.

The 70-foot aluminum catamaran, designed by Incat Crowther, will carry 84 passengers, have a 22-knot top speed and will be built by the Bay Ship & Yacht Co. shipyard in Alameda, with the launch planned for next year.

The ferry is named Water-Go-Round, a reference to the cyclical nature of how the technology it will use works. Simply put, hydrogen can be created from water and after being used in a fuel cell, becomes water again.  Since water is the only byproduct of the power system, adoption of this technology for shipping promises drastic reductions of pollutants and greenhouse gases.

The catamaran is powered by dual 300 kW electric motors using independent electric drivetrains from BAE Systems. Power is generated by 360 kW of Hydrogenics proton exchange membrane fuel cells and Li-ion battery packs. Hydrogen tanks from Hexagon Composites, with valves and hardware from OMB-Saleri, will be installed on the upper deck, and contain enough hydrogen to go up to two days between refuelings.

After the vessel is launched it will be operated for three months in San Francisco Bay.  During this period Sandia National Laboratories will independently gather and assess performance data. CARB will use the real-world data to verify the suitability of the technology for marine use. The partners will also collect feedback from passengers and operators to assess the best commercial markets.

Red and White Fleet will operate the multi-purpose vessel for the demonstration and plans to purchase the Water-Go-Round as the first of several vessels with GGZEM integrated powertrains in order to meet its commitment to a 100% zero emission operation.

The consortium partners have ambitious plans for the future. GGZEM says it is positioning itself to lead the market in transforming the way vessels are built in the U.S., as well as be a global leader in the fight to end maritime pollution and climate change.

Dr. Joseph W. Pratt, CEO of GGZEM, is a former researcher at Sandia National Laboratories and a coauthor of the landmark SF-Breeze feasibility study released by MARAD in 2016, which examined the technical, regulatory, and economic viability of a high-speed passenger ferry powered solely by hydrogen fuel cells and its associated hydrogen fueling infrastructure in the San Francisco Bay (see earlier story).

The consortium’s roots go back to a conversation between Mr. Escher and Dr. Pratt that led to the SF-Breeze project and then to further studies, leading to a case study of 14 widely-different vessel classes, from small fishing boats to the largest containerships, that concluded that all of them can be practically powered by hydrogen fuel cells. Now things are moving beyond the study stage.