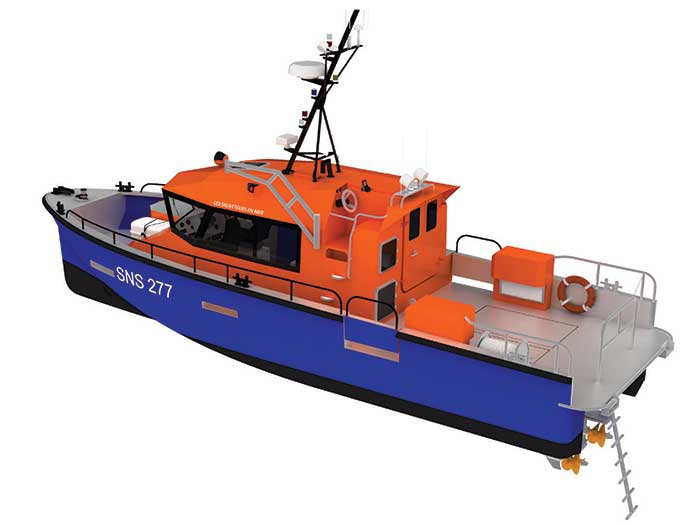 The new boat will operate in Brittany’s Morbihan Gulf. It has been ordered following SNSM’s experience with an earlier Alumarine delivered in 2014 to SNSM rescuers in Le Barcares in the south of France.

Visits to that boat and sea trials by the Brittany rescuers were a decisive factors in their choice.

“Quality of construction, ergonomic deck, large wheelhouse, low consumption are all aspects that influenced our choice for this versatile model that fits very well with our missions,” says Pierre Johannel, President of the Morbihan Gulf SNSM. “In addition, this professional boat is particularly well suited to our navigation zone with its excellent seaworthiness, low windage and low draft. This boat is fast, starts planing rapidly and generates a low bow wave,”

Designed by Geronimo Naval Design, the new 11.6 m boat —SNS 277 — will be equipped for a variety of rescue missions.

The deck area, completely protected by handrails, has a flat and clear rear deck to facilitate the handling of rescued persons on a stretcher and facilitates helicopter lifts.

The asymmetric wheelhouse provides a wide port side-deck and a spacious interior layout.

The wheelhouse has two separate areas, the helmsman’s station and an area dedicated to the care of the rescued persons.

A double door at the rear of the wheelhouse and the lateral hull side doors allow easy passage of a stretcher and emergency personnel, which facilitates medical evacuations.

A lifting boom on the port side and the clear port side-deck allow the quick lifting of survivors by special rescue nets.

The vessel’s rescue towing function is provided by a drum and rear bollard arrangement offering a towing capacity of 1.5 t.

The hull shape of the SNS 277 has been already tested and offers excellent seakeeping and good maneuverability.

With her planing hull and a 330 hp propulsion system, the boat rapidly starts planing. The operational speed ranges between 15 to 25 knots with the possibility of rapid transits at more than 30 knots.

Specification of the SNS 277