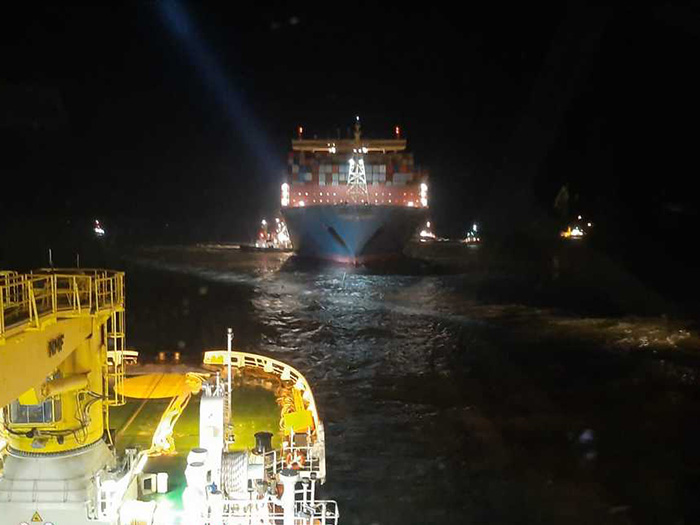 The Maersk containership Maersk Mumbai, which grounded on the approach to Bremerhaven, February 2 has been refloated.

The operation was coordinated by Germany’s Central Command for Maritime Emergencies (Havariekommando), which said that the offshore tug Union Sovereign (178 tonnes bollard pull), the multi-purpose vessel Neuwerk (113 tonnes bollard pull) and 6 assisting tugs were involved in the towing test.

In its most recent update on the incident Maersk said:

“We are pleased to confirm that the vessel Mumbai Maersk, which ran aground outside Bremerhaven, Germany on 2 February, is safely afloat. The vessel was re-floated on 4 February at 1:30 a.m. CET. The operation was conducted in close cooperation with salvage company Smit and the German Havariekommando. The vessel is at a safe position for further hull and machinery assessment before it is expected to continue its voyage. Furthermore, an internal investigation into the cause of the grounding will be taking place.

“We expect to be able to discharge the cargo onboard the vessel for our German import customers tomorrow. If the vessel assessment finds any reason to further delay the sailing to the next port Gothenburg, Sweden, we will action alternative options to minimize the delay. This could include a feeder vessel to the remaining ports left on the rotation or making another vessel do an extra loop.”

This morning, broadcaster NDR reported that the ship was under way to Bremerhaven under its own power.