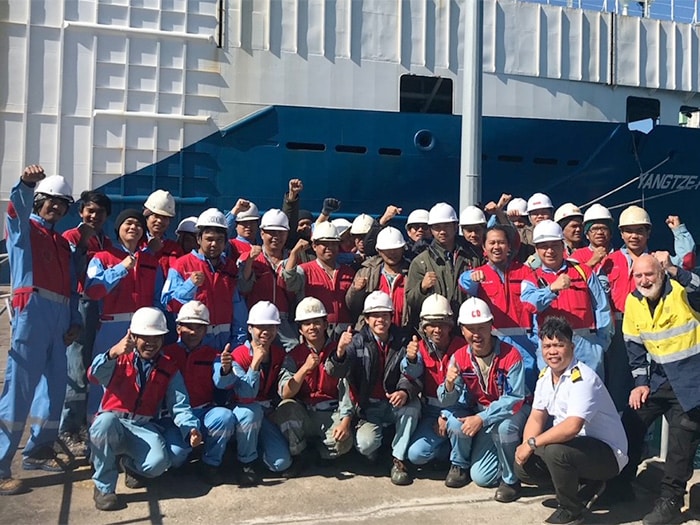 Though they may be putting on a smile for the camera, the crew of the Yangtze Fortune have little to cheer unless ITF and AMSA can find a just outcome for them. [ITF photograph]

The International Transport Workers’ Federation (ITF) reports that a Liberian-flagged livestock carrier, the Yangtze Fortune, has been arrested in Portland, Victoria, Australia, by the Australian Federal Court. In the meantime, the Australian Maritime Safety Authority (AMSA) and the ITF are working with the Admiralty Marshal to support the crew after the ship’s owner failed to pay their wages or meet its obligations under international maritime law.

According to the Equasis data base, the Yangtze Fortune is now on its sixth name and third flag since being delivered as the Medadriatica in 2005. Its registered owner is shown as Soar Harmony Shipping Ltd, which lists its address as in care of the ship’s ISM manager, Accord Ship Management of Dalian, China

The ITF says that the ship, which which operates a trading route between Australia and China, has been anchored near Portland since October and is subject to an abandonment notice lodged with the International Labour Organization. The ship is also subject to Australian Federal Court proceedings brought by commercial creditors from Singapore to recover debts owed to them by the ship’s owner.

After many weeks at anchor near Portland, provisions aboard the ship are running low and many of the crew are desperate to return home but must now stay with the ship while court action and the ship’s sale process unfold.

The ITF Australian Inspectorate Coordinator, Ian Bray, said that the more than 30 crew members, all of whom hail from the Phillipines, had been abandoned by their employer on the stranded ship.

“These workers are already owed, collectively, more than a quarter of a million dollars in unpaid wages, and while the court action is on foot they must stay with their ship despite the ever diminishing prospect of receiving what is owed to them,” Bray said.

The ITF says that shipboard documentation shows that the crew received only one third of what they were owed in October, while the ITF’s investigation has also revealed that the crew’s wages payments in both September and August were made using monies set aside for workers’ leave entitlements and the company’s provident fund.

ITF Australia’s Assistant Coordinator, Matt Purcell, who is providing support to the crew while they’re alongside the wharf in Portland, said that five members of the crew had already clocked up eight months aboard the vessel and were desperate to return home to their families.

“These vulnerable, exploited crew face the prospect of spending months longer aboard this ship in dreadful conditions just to get what’s already owed to them, or the choice of returning home after eight or nine months away with nothing to show for it,” he said.

Discussions with the crew manager, ship owner and the flag state have revealed that the company holds little hope of trading out of its financial problems. The ITF and AMSA have been working with the flag state and the Admiralty Marshal appointed to handle the sale of the ship to find a just outcome for the seafarers stuck aboard in Portland. Unfortunately, says the ITF, even if the ship is sold at auction, the crews may find themselves at the mercy of the market if the proceeds of sale fail to cover the company’s debts to creditors and the total unpaid wages bill.

Bray says that the Yangtze Fortune is representative of a broader problem in the livestock shipping industry where crews go unpaid and ships operate on the precipice of insolvency.

“We believe there is an epidemic of borderline insolvency amongst the operators of these livestock ships as they repeatedly feature among the worst cases in our inspections around Australia and internationally,” Bray said.