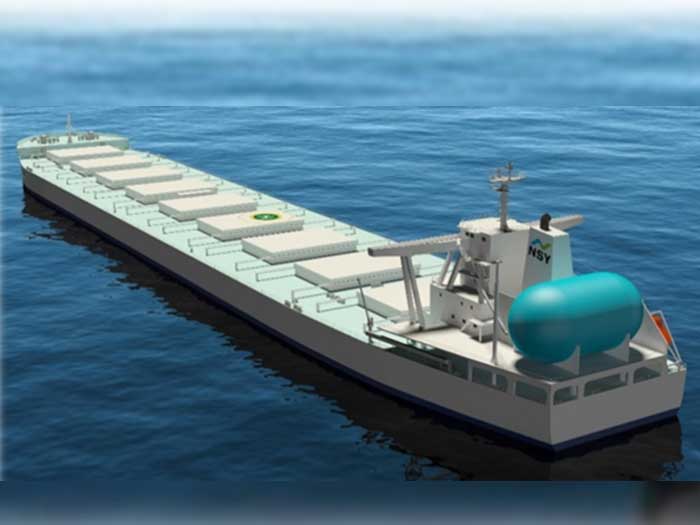 LNG fueled bulkers have been designed by Nihon Shipyard, a joint venture between Japan Marine United and Imabari Shipbuilding.

JFE Steel Corporation is to become the first company in Japan to deploy LNG-fueled ships in the 21,000 dwt size range. It has just signed long-term deals with NYK Line, Kawasaki Kisen Kaisha and Mitsui O.S.K. Lines (MOL) to charter three 210,000-ton LNG-fueled bulkers to import iron ore and coal from overseas locations to its steelworks in Japan.

The ships have been designed by Nihon Shipyard. Nihon is a joint venture between Japan Marine United and Imabari Shipbuilding and the ships will be built by those two yards, with deliveries starting at the beginning of 2024.

Each ship will have an overall length of less than 300 meters, beam of up to 50 meters, freeboard of up to 25 meters and draft of up to 18.4 meters. Maximum gross tonnage will be 110,800 tons and maximum deadweight capacity will be 210,000 tons

JFE Steel says its shift to ships using LNG instead of conventional heavy-oil fuels can reduce emissions of carbon dioxide by around 25-30%, sulfur oxides by roughly 100%, and nitrous oxides by around 85%.

JFE Steel also plans to consider using zero-emission ships powered by other eco-friendly fuels such as ammonia and carbon-recycled methane.