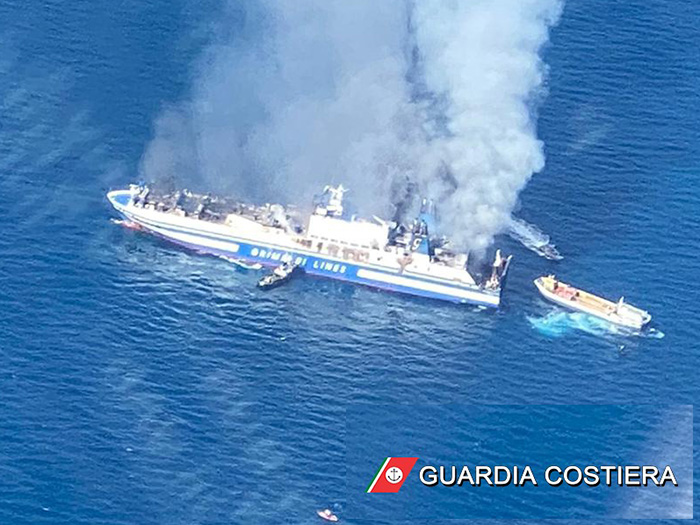 Greek media reported Sunday that the national fire service had recovered the body of a 58-year old Greek truck driver from the Grimaldi Group RoPax ferry Euroferry Olympia. The body was recovered as efforts continued to put out a fire that broke out aboard the vessel days earlier, at approximately 4.12 a.m., local time, on February 18, while she was about 10 miles north of the island of Corfu.

The truck driver was one of 12 aboard the Euroferry Olympia still believed to be missing.

In its initial report on the incident, Grimaldi Group said that the ship had 239 passengers of various nationalities on board, as well as 51 (Italian and Greek) crew members. In addition, the ship was carrying 153 commercial vehicles (trucks and trailers), as well as 32 passenger vehicles.

Following the master’s decision to abandon ship, the Italian and Greek Coast Guard vessels evacuated those on board, taking them to Corfu. However, following a check in Corfu, 13 people appeared to be missing, five of whom were traced as being still on board. Two of the five, an Afghan and a Bulgarian, were subsequently evacuated by Greek search and rescue teams and transported to hospital in Corfu for a medical check-up.

On February 20, ekathemerini reported that “members of the Fire Service’s special Disaster Management Unit were able to locate and rescue a man on the fire stricken Euroferry Olympia on Sunday morning. According to the Hellenic Coast Guard, the man was seen moving near the stern of the ship and the operation to to safely rescue him was successful.”

Media reports note that rescue efforts have been complicated by the fact that some truck drivers chose to stay in their vehicles for the crossing and there is also speculation that some unauthorized extra passengers may have been on the vessel.

The fire on the Grimaldi Group vessel is one of two that broke out aboard vessels in European waters last week.

On February 17, all 22 crew members of the car carrier Liberty Ace were safely evacuated from the vessel after a fire broke out at approximately 11.30 p.m., CET, the previous day. At the time, the ship was some 90 miles southwest of the Azores, en route to the U.S. from Germany with a cargo of cars.

The vessel is operated by Mitsui OSK Ltd. A statement released February 19 by MOL Ship Management (Singapore) said that the ship was assumed to still be on fire south of the Azores and was currently drifting away from the islands.

Boskalis was called upon to provide emergency response assistance for both ships, mobilizing teams from subsidiary Smit Salvage.