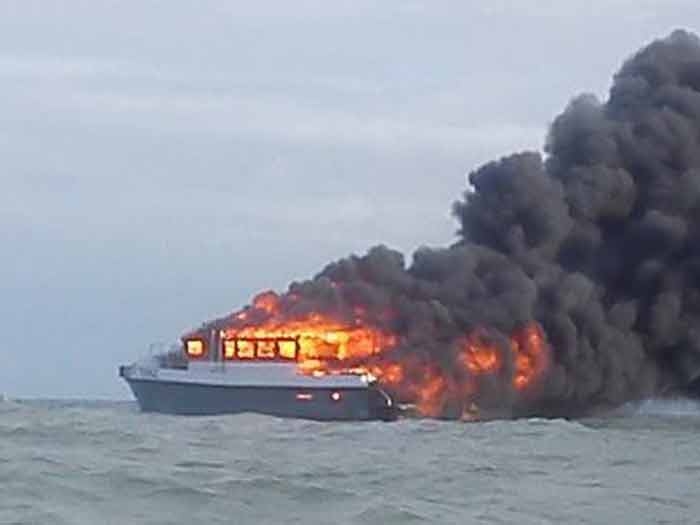 At this stage in the investigation, says the MAIB the most likely cause of the fire is considered to be an uninsulated exhaust pipe from an air heater being in close proximity to the plywood structure of the vessel. Evidence from similar vessels indicates that this is not an isolated case and a Safety Bulletin has been published with the following advice to owners and operators:

At approximately 1230 (BST) on 14 January 2014, the 14m wind farm support catamaran, ECC Topaz, caught fire 11 nm east of Lowestoft. The three crew members on the vessel were unable to extinguish the fire, which spread rapidly throughout its GRP structure, forcing them to abandon to a liferaft. There were no passengers on board at the time of the accident.

Once in the liferaft, the skipper transmitted a “Mayday” call using a hand-held VHF radio and then activated a Search and Rescue Transponder (SART). The crew of another vessel in the vicinity alerted the coastguard when they saw thick black smoke on the horizon. The crew of ECC Topaz were winched from the liferaft by helicopter and taken to a nearby hospital for treatment. The fire on ECC Topaz continued unabated and, at 1422, the burnt out remains of the vessel foundered in 33 m of water.

There is compelling evidence to suggest the source of the fire was in way of an uninsulated section of the exhaust pipe from a diesel fired air heater that was situated in a compartment in the starboard hull, directly under the wheelhouse. A few days after the fire, the MAIB received information that crew on similar workboats had observed charring to the underside of main decks, where they were penetrated by the exhaust pipes from air heaters.

Detailed examination of one of these vessels revealed that the heater exhaust had been modified to route through a single walled, inverted U-pipe on the main deck to prevent sea water ingress from the exhaust overboard. As originally built, the exhaust pipe was insulated by woven glass lagging protected by an aluminum oversleeveto prevent the hot exhaust gases (around 450ºC) from heating the surrounding area. However, where the exhaust piping had been broken to route it through the main deck, the connection between the heater exhaust pipe and the inverted U-pipe was not insulated.

Consequently, the uninsulated section of the hot exhaust pipe in close proximity to the plywood underside of the deck, caused the charring seen in the photograph at right. ECC Topaz was fitted with the same model of heater and had the same exhaust configuration.

The MAIB has concluded the most likely cause of the fire on board ECC Topaz was the poorly insulated hot exhaust pipe igniting the plywood structure of the vessel. The compartment where the heater was situated was not fitted with any fire detection or extinguishing systems, and contained several flammable items including sacks of rags, rolls of paper towels and several small drums of oil that would have provided additional fuel for the fire once it was ignited.

Uninsulated exhaust pipes will quickly reach the temperature of the exhaust gases and, when in close proximity to wood or other combustible material, the likelihood of a fire is very high. Owners andoperators of vessels are strongly advised to:

A useful reference is [U.K. Marine & Coastguard Agency Marine Guidance Note] MGN 497 (M+F): ‘Dangerous Goods – including Chemicals and other Materials – Storage and Use on Board Ships.’