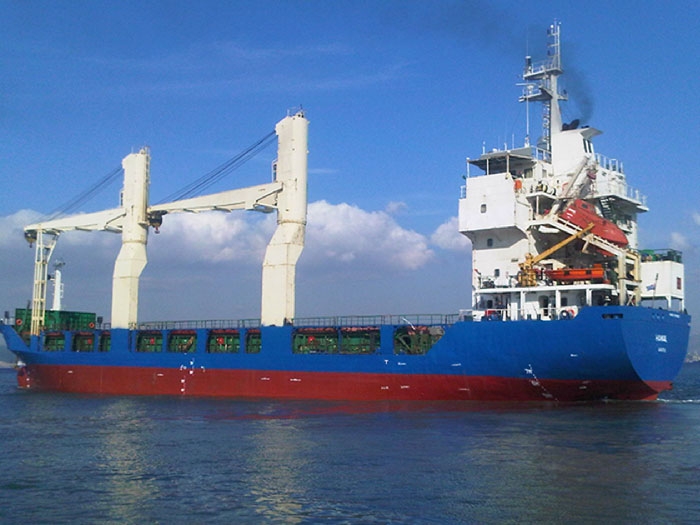 MAY 11, 2015 — The third officer of a Turkish owned 5,055 dwt general cargo ship was killed and several other crew members were wounded late yesterday after the vessel was shelled off the Libyan coast and attacked from the air, the Turkish Foreign Ministry says.

Libya is in a state of violent chaos as two rival governments, both has backed by armed groups, battle for control.

Reuters reports today that forces loyal to Libya’s internationally recognized government said they shelled the ship off the Libyan coast after it was warned not to approach.

The ship was targeted about 10 miles from the coast on Sunday after it was told not to break a ban on approaching the eastern city of Derna, Reuters reports Libyan military spokesman Mohamed Hejazi as saying.

Turkey says that the Cook Islands flagged ship Tuna-1, which is owned by Istanbul headquartered Bergen Shipping, was approaching Tobruk Part to deliver sheetrock cargo taken from Spain when it was shelled.

Following is the text of the Turkish Foreign Ministry statement:

It was reported that a Cook Islands flagged dry cargo ship named “Tuna-1” belonging to a Turkish company was subjected to artillery file from land while it was sailing in international waters, 13 miles off Tobruk yesterday evening (10 May) towards Tobruk/Libya port in order to deliver the plasterboard cargo loaded from Spain.

It was conveyed that while the ship was trying to leave the area of artillery attack, it was the target of two additional subsequent air attacks. It was also reported that during the attacks, the third officer of the ship, a Turkish citizen, was killed. Some of the crew members were wounded and material damage occurred in the ship. We wish God’s mercy upon our citizen who lost his live in the incident.

We strongly denounce this heinous attack towards a civilian ship in international waters and we condemn those who carried out the attack.

We have strongly protested before the relevant Libyan authorities this heinous attack. We have demanded that all actions threatening the security of this ship and other Turkish ships that may be sailing in the region should end immediately, and the necessary legal procedures against the authors of this attack should be carried out. We reserve all our rights including of compensation stemming from international law within the scope of the attack towards the ship in question. Necessary demarches are being taken regarding this issue before the related international organizations.

This attack is a new example of the violations of international law perpetrated by those who have been targeting and bombing the civilian infrastructure in Libya, including airports and seaports, and attacking airports, thereby threatening civilian aircrafts in order to disrupt flights by official delegations that are participants of the UN Libyan Political Dialogue Process, threatening civil airplanes or as they have done previously, attacking civilian ships. It is of vital importance that those committing such crimes should be held responsible within the framework of the UN Charter and related UNSC Resolutions.