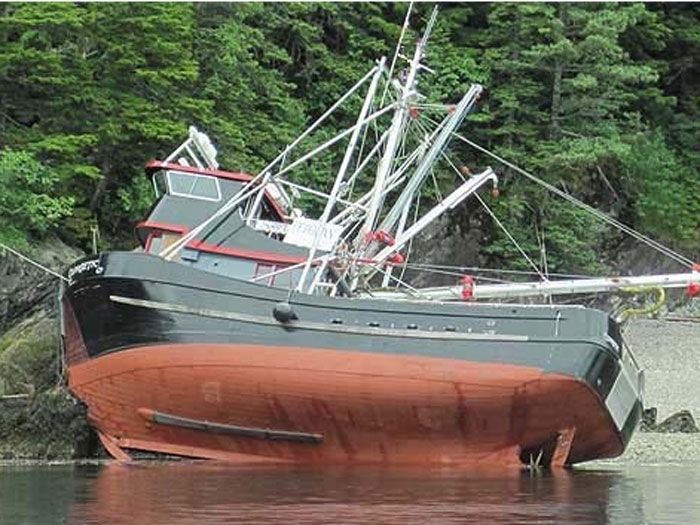 SEPTEMBER 2, 2015 — The U.S. Coast Guard has issued a safety alert following an increase in the number of groundings on Alaskan shorelines involving uninspected commercial fishing vessels. Since July 14, 2015, a total of 16 reported groundings have occurred.

In a number of investigations, it was learned that the captain or crewmembers on the vessel had fallen asleep at the wheel after working extensive hours over several days. The safety alert (No 8-15 “Asleep at the wheel: When fatigue catches up”) says that fatigue may have been a causal factor in many of these groundings.

“Fatigue symptoms are not limited to just a person falling asleep. Fatigue issues are strongly related to human errors and poor performance. Nearly all modes of transportation are impacted by fatigue and many studies have been performed about its negative short and long term effects,” says the alert.

Following is taken from the alert:

The International Maritime Organization (IMO) has formulated a definition of fatigue in which fatigue is conceptualized as a “reduction in physical and/or mental capacity as the result of physical, mental, or emotional exertion which may impair nearly all physical abilities including strength, speed, reaction time, coordination, decision making or balance.” The IMO acknowledges the relation between fatigue and human error as indicated above. Fatigue can also be divided into categories in many different ways. However, systematic studies seem to find between three and five dimensions, including general fatigue (e.g., tired, bushed, exhausted), mental fatigue (e.g., cognitive impairment), physical fatigue, sleepiness with a tendency to fall asleep, and sometimes lack of motivation or complacency. In very general terms, fatigue and its ill effects can be minimized by persons receiving periods of good quality uninterrupted rest.”

Crewmembers often work long hours on fishing vessels, performing physically demanding tasks in harsh environments. Crewmembers may not be afforded sufficient time for recuperative sleep to prevent the development of acute fatigue due to vessel navigation and fishing or process demands. Many of the processes onboard a vessel must occur in a timely fashion and particular order. Skipping one element at a certain point of time may have negative economic impacts. For example, providing a six-hour rest period in lieu of dropping another set of crab pots would likely be an industry anomaly and result in a reduction of revenue for a specific period of time.

Captains and crewmembers are generally not assured a rest period at any specific time or in a scheduled manner. In addition to the fishing element of business, the vessel must be continuously navigated and herein is the problem. The captain in command of the vessel has to be aware of his own degradation of mental and physical capabilities and at the same time ensure that his relief on the wheel (if any at all) has had an adequate period of rest in order to safely navigate the vessel. Similarly for other crewmembers, monitoring is necessary because when the ill effects of fatigue finally catch up to an individual, the results can be a procedural mistake, error in judgment, or an action/inaction resulting in an injury or death. For those at the wheel, the consequences of improperly navigating a vessel can be extreme including the following: loss of life and injuries; loss of cargo, vessel or income; incurrence of repair and salvage costs; and harm to the environment. Such events can also potentially lead to fines, civil penalties, and criminal prosecutions.

To prevent these types of casualties, the Coast Guard recommends that owners of fishing vessels take advantage of the existing technology that can help prevent persons from falling asleep at the helm. Such technology may include the installation of watchstander alarms which sound and require silencing at preset intervals or the use of various safety and warning features associated with GPS, Radar, depth sounding and other electronic equipment. However, it is critically important that such equipment should only be used as backup measures and not as a methodology to facilitate a navigator’s sleep while underway.

The best defense against a fatigue-related navigation casualty is a well-rested watchstander who is later relieved by another watchstander that has had adequate time to sleep.

The Coast Guard recommends that all fishing vessel owners and captains learn about Crew Endurance Management, which is a system for managing the risk factors in maritime work environments that can lead to human error and performance degradation.