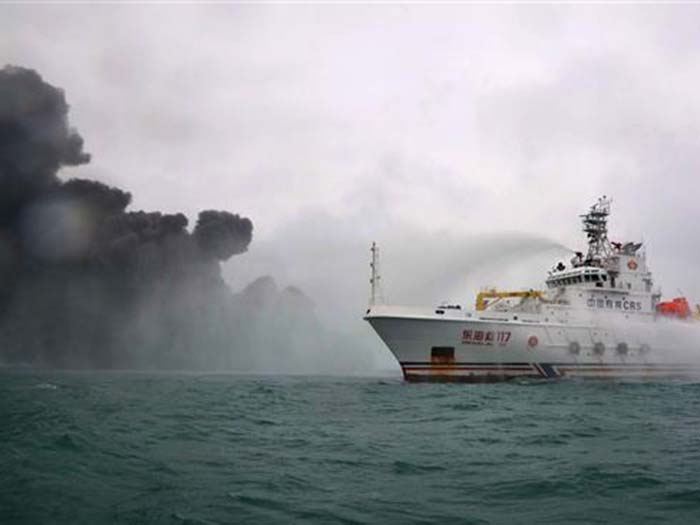 JANUARY 10, 2018 — Iran’s state controlled PressTV today reported Chinese authorities as saying that no major oil spill had been detected from the blazing Panamanian registered, Iranian owned tanker Sanchi, but that an explosion had forced firefighting vessels to temporarily suspend work.

The 2008-built, 164,154 dwt Sanchi, was in collision with the Hong Kong registered CF Crystal Saturday night (see earlier story). The incident occurred about 260 km (160 miles) off the coast of Shanghai.

One body has been found but 31 seafarers from the Sanchi — mainly Iranians — remained missing four days after it collided with a freighter off Shanghai.

PressTV quotes the owner, National Iranian Tanker Company, as being hopeful that some crew members might be in a safe part of the vessel and would be rescued.

The Chinese authorities reported that a Japanese vessel had joined the firefighting efforts and ships were attempting to use foam to extinguish the blaze, but the measures had “not had the anticipated effect”.

The ships temporarily halted work Wednesday afternoon after they were forced back by an explosion, the ministry added, saying that weather conditions have also been unfavorable, with “overcast and rainy weather,” strong winds and waves.

PressTV quotes China’s transport ministry as saying that as of 6:00 pm Tuesday, “no large-scale oil spills were found on the sea surface” around the stricken vessel, and that the tanker’s cargo of gas concentrate was expected quickly to evaporate upon hitting the water, with “very little residue on the water’s surface.”

A simulation test also found that less than one percent of oil content would remain on the sea surface five hours after a condensate oil leak.

Thirteen vessels are still searching for missing crew members within 900 square nautical miles of the tanker, according to the ministry.