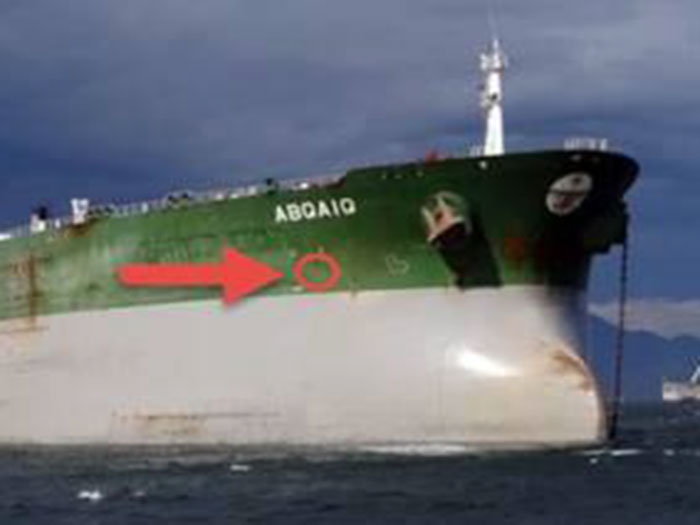 According to Dryad, the initial report stated that the vessel was being escorted by a Saudi warship when 45 nm west of Hoedida.

The vessel was hit on the starboard bow in the position circled in the illustration. The location of impact is likely to be a forepeak machinery room or store rather than a cargo carrying area, says Dryad. The impact damage is estimated at 0.5 m to 1m across with a 20-30 cm hull penetrating hole. The steel appears to bend inwards with a mark indicating a penetration from fine on the starboard bow.

A single uncorroborated source in country stated that only the outer hull was punctured, the second was almost ruptured but held.

Dryad says that, while there is damage to the vessel’s paint there is no apparent “spall pattern” as would be typical with a rocket propelled grenade (RPG).

Analyzing the incident, Dryad says that an uncorroborated, medium confidence level, single source in country stated that the Saudi Naval Vessel only started to escort after the explosion. The source went on to say that no small vessels were seen visually or by radar meaning that a standoff attack with an RPG seemed unlikely. Forensic weather analysis shows that small boat operations in the area at the time of attack would have been inhibited in both targeting and operation of a weapon system. Radar detection distances of small boats would have been severely hampered and detection of small craft by radar is unlikely outside of 2 nm. Given the absence of a spall pattern and the size of the hole, it is assessed that an RPG attack from a small boat is unlikely.

Without further analysis of blast diagnostics is not possible to confirm the weapon system used. Dryad assesses however that there are two primary weapon system that are likely:

1. An improvised High Explosive projectile (artillery or recoilless rifle) round with a nose fuse and of a caliber of between 82-105mm.

In both scenarios, because of the lack of explosive (rather than straight kinetic damage) it is possible that the round has not functioned.

There are two possibilities for the targeting of MT Abqaib; reactive opportunistic targeting or deliberately proactive targeting as a result of being a Saudi flagged vessel being escorted in transit by a Saudi warship.

Targeting by AIS surveillance has been discounted, due to the vessel being inactive on AIS from Monday Apri l2. 2018, 1707 UTC. MT Abqaiq ceased transmitting on AIS when south of Aden before making a well-planned transit of the Bab Al Mendeb by night. For an opportunistic attack Houthi forces would be required to have a prepositioned weapon system and targeting to be in place for a prolonged period of time thus increasing the likelihood of detection and compromise of a valuable weapon system.

Given the Houthi agenda of focused targeting of Saudi assets then a potential firing point of 45 nm east of vessel location would indicate a shore launched anti-ship rocket system. Further still the Saudi Coalition blockade of Hoedida presents a concentration of viable targets in this area. It is assessed that the vessel was not identified until Hanish Island, unless prior information regarding the vessel’s whereabouts had been obtained.

“Of note,” says Dryad, “distance at which flag can be positively identified are approximately 1,000 yards with naked eye (x 7 for stable magnification) therefore it is assessed that third party targeting in this instance would be as a result of local fishing activity off of Hanish.”

The precise nature of targeting and weapon system remains unknown.

Dryad says that it continue to assess that targeting by Houthi rebels is almost exclusively as a result of vessels being identified as being in support of the Saudi led coalition in Yemen or due to proximity to Saudi Naval vessels. Houthi rebels are assessed as being highly unlikely to utilize limited and valuable weapon systems against targets that are not positively identifiable as being of Saudi origin or in direct support of Saudi coalition forces.