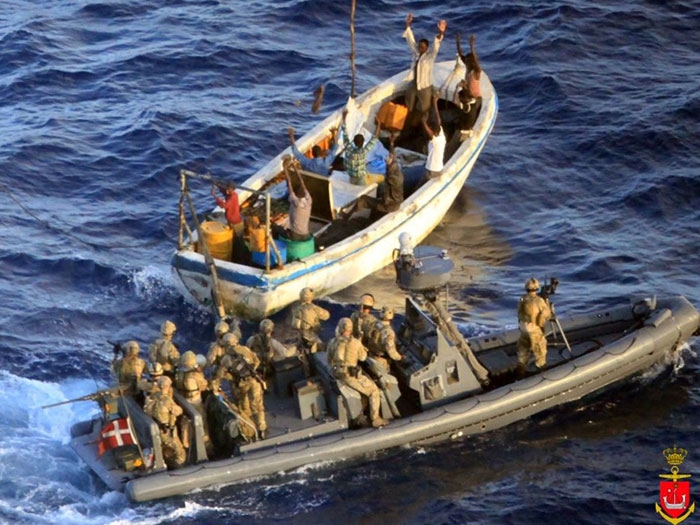 Nine guys seen here with their hands in the air have gotten $3,339 apiece from Denmark

DECEMBER 9, 2014 — Denmark has paid $3,339 each to nine Somalis intercepted by the Danish warship Esbjern Snare after an attempt to hijack the Danish cargo ship Torm Kansas in the Indian Ocean on Nov. 10, 2013.

The nine pirate suspects were held on board the warship, where Danish police were present, while authorities decided on whether they could be prosecuted in Denmark.

Newspaper Politiken says that a preliminary hearing was held in Copenhagen Nov. 23 with the nine testifying by videolink that they were fishermen who had lost their gear. They were remanded in custody,in absentia, but their court appointed attorney appealed on the grounds that the accused should have been brought before a judge within 24 hours of their arrest.

Five days later, the high court agreed with defense counsel that there had been, according to Politiken, a significant breach of fundamenta legal certainty (væsentlig tilsidesættelse af fundamental retssikkerhe).

Prosecutors subsequently decided to drop the case before the Danish courts and on November 30 the Esbern Snare deposited the nine in the Seychelles for prosecution there.

The pirate suspects are being compensated for the 13 days they were held on Esbern Snare prior to the Nov. 23 hearing.

The Danish decision comes within days of the European Court of Human Rights ruling that France should pay nine Somali pirates apprehended by French forces thousands of euros because they were not immediately brought before a French judge on arrival in France.