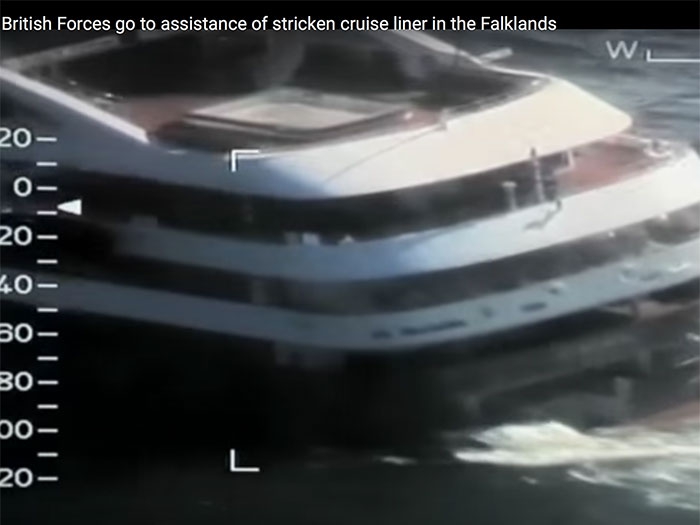 JULY 22, 2016 — A French marine safety investigation report into the November 18, 2015 fire on board the Compagnie du Ponant expedition cruise ship Le Boréal, near the Falkland Islands, finds that it was caused when a fuel filter clogged and the officer on watch at night tried to change it.

The officer mistakenly opened the wrong filter and pressurized oil sprayed onto a hot engine part in the diesel generator compartment, causing a fire to break out that spread to the upper engine room.

[Although we earlier identified the officer on watch as part of the ship’s hotel staff, we are informed that though his title was “hotel engineer,” he was a fully qualified engineer officer, with all the appropriate ratings for maintenance, who was also in charge of all hotel technical maintenance.]

The water-mist extinguishing system triggered automatically, but was not effective in preventing the fire from spreading along bunched cables.

The fire caused the loss of all power and left the vessel drifting.

The captain ordered the ship, with 347 passengers and crew, to be abandoned early in the morning. A distress call was issued just after 2 a.m. while it was near Cape Dolphin, the northerly point of East Falkland, Falkland Islands and the passengers and crew were subsequently evacuated by Royal Air Force helicopters and other assets (see video).

Among the recommendations made in the investigation report from BEAmer (Bureau d’enquêtes sur les événements de mer) were that Ponant “reflect on the opportunity of the presence of a mechanic rating during the night watches, particularly for work on fuel circuits” and “explore the value of segregating the MDO and HFO circuits feeding the diesel generators.”

Read the report (which is in both French and English) HERE