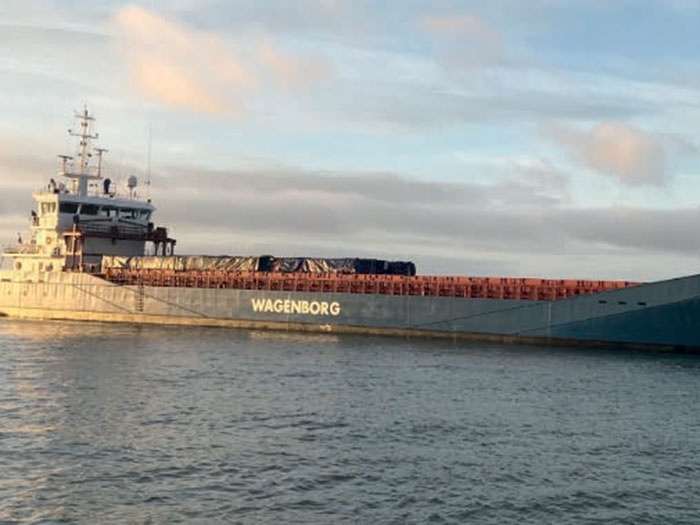 The MAIB report in question is on the October 10, 2017 grounding of the 89.99 m Netherlands-flagged general cargo vessel Ruyter on the north shore of Rathlin Island, U.K.

Ruyter’s bow shell plating and frames were damaged by the grounding, which resulted in flooding of the bow thruster space and forward voids, however there were no resulting injuries or pollution.

The investigation found that Ruyter grounded because no action had been taken to correct a deviation from the ship’s planned track.

The 59-year old master, who had been consuming alcohol before taking over the watch and was the sole watchkeeper, had left the bridge. The bridge navigational watch alarm system (BNWAS), which could have alerted the chief officer to the fact that the bridge was unmanned, had been switched off.

The chief officer had previously been concerned over the master’s regular excessive consumption of alcohol, but at the watch handover had been satisfied that the master was fit to take the watch.

The ship’s manager, VD Innovation BV, has since taken action, including the introduction of random alcohol testing and the empowerment of its crews to alert any concerns they may have to the company.

Following are some extracts from the MAIB report.

EVENTS LEADING UP TO THE GROUNDING

At 2105, Ruyter‘s master set the autopilot to steer 145°. The ship then maintained this heading until about 2311, when it ran aground on the north shore of Rathlin Island.

The chief officer, who had been woken up by the noise and vibration of the vessel grounding, was on his way to the bridge when he met the second officer, who had also been woken. They reached the bridge together to find it deserted. There were numerous alarms sounding, including the bilge alarm for the bow thruster space.

The second officer realized that Ruyter was aground. He set the telegraph to zero pitch and switched the steering to manual mode, while the chief officer silenced the alarms and switched on the deck lights.

The second officer sounded the general alarm and the remaining crew, including the master, mustered on the bridge.

The master’s consumption of alcohol within 4 hours of taking his designated watch was contrary to the company’s SMS requirement. The fact that he regularly consumed alcohol on board suggests that this might not have been his first infringement of the SMS instruction. Ruyter was the master’s first command on a ship managed by VD Innovation BV. He had joined the vessel 6 weeks before the accident and, during that period, the company’s oversight of his performance on board had been insufficient to identify and address this safety issue. With no previous incidents resulting from his consumption of alcohol, and with no enforcement of the company’s alcohol policy, the master’s acceptance of the risks associated with his alcohol consumption is likely to have been reinforced over time.

Although the chief officer considered the master’s regular alcohol consumption to be excessive, and had successfully challenged him in this regard, when the master resumed his heavy drinking the chief officer had no means of validating his concerns. The SMS referred to the company arranging for alcohol testing, but there was no equipment on board for the chief officer to use at sea to validate his assessment. The SMS did not contain instructions on how an officer should tackle a master’s inappropriate behavior, and the chief officer did not feel sufficiently empowered to take decisive action and tell the company about the master’s drinking. As the master continued to perform his duties having consumed alcohol, without consequence, it is likely that the chief officer came to accept this as the norm, with the result that he was content for the master to take over the watch at 2000.

After the master had left the bridge, Ruyter ran aground because: The bridge was unattended and there was no-one in a position to hear and act on the navigational alarms.

The BNWAS was switched off, so the chief officer was not alerted that the bridge was unmanned.

STCW states that the officer in charge of the navigational watch may be the sole lookout by day, but does not explicitly require the addition of a lookout during the hours of darkness. A number of marine administrations very strongly recommend that a lookout is present during the hours of darkness but, in this instance, Ruyter’s watchkeeping schedule specifically required a lookout to close up between 2200 and 0600. Had a dedicated lookout been on Ruyter’s bridge during the evening of 10 October when the master left the bridge, it is likely he or she would have been able to act to prevent this accident occurring.

The company was explicit in its requirement that the BNWAS should be switched on at all times when at sea, but on board Ruyter this instruction was ignored. It is possible that the need to constantly cancel BNWAS alerts was seen as an irritation, or it was disabled to prevent it alerting the crew on the occasions that the bridge was unmanned. The master was known to have left the bridge unmanned on a number of previous occasions, and it is possible that it was his decision that the BNWAS should be switched off. Whatever their reasons, Ruyter’s watchkeepers perceived little benefit in having an operational BNWAS, and so it was left switched off.

There were clear requirements for both a lookout to be posted at night, and for the BNWAS to be turned on. However, Ruyter’s master saw no benefits to either. Whether the other watchkeeping officers did not feel empowered to challenge his decisions, or simply conformed to the onboard routine is unclear. However, as there were no negative consequences and no-one challenged that company instructions were being ignored, not posting a dedicated lookout at night and leaving the BNWAS switched off had become normalised behaviour on board. This had resulted in Ruyter’s watchkeepers actively disabling the crucial alarms and defenses that were intended as barriers to help prevent an accident. Refloating attempt

The extent of the company’s oversight of the master’s performance on board had been insufficient to identify and address his routine consumption of alcohol. Random alcohol testing did not form part of the company’s alcohol policy and there was no formal process in place which the chief officer could have used to raise awareness of the master’s inappropriate behaviour.

The chief officer did not feel sufficiently certain of the master’s impairment through alcohol consumption, or sufficiently empowered, to raise the matter with the company.

By not posting a lookout at night and leaving the BNWAS switched off, Ruyter’s watchkeepers had actively disabled the crucial alarms and defences that were intended as barriers to help prevent an accident. Further, as there had been no negative consequence or challenges to these decisions, this had become the normal routine on board.

VD Innovation BV has since taken action, including the introduction of random alcohol testing and the empowerment of its crews to notify the company whenever there are concerns relating to the safe operation of their vessels.

In view of the actions taken, no recommendations are made in this report.