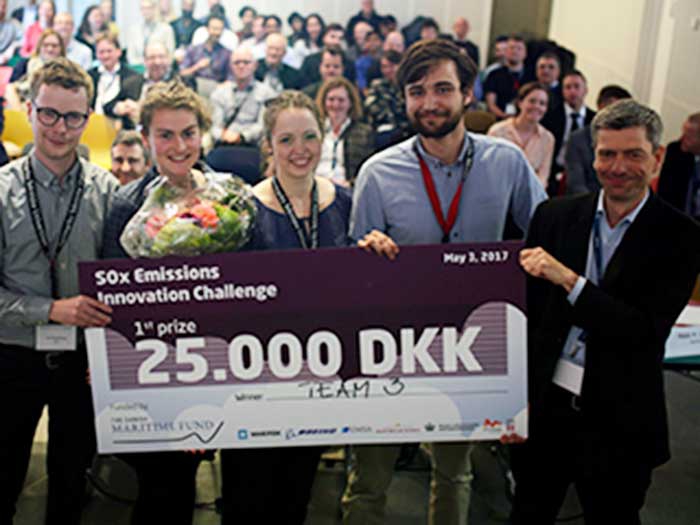 Winning team poses with their prize

MAY 4, 2017 — Ships visiting European ports may have to be fitted with NOx sensors — to monitor other ships’ emissions. That is a key element of the winning entry in a student competition — and an EMSA official says it “has the potential for further research and implementation in the near future.”

Six teams of Danish Technical University engineering students last night presented a panel of judges with their responses to the SOx Challenge – a student competition on how to detect if ships comply with the international regulation of sulfur emissions.

“The students have worked in cross-disciplinary teams which have enabled them to cast away limitations and to propose some highly creative solutions,” says Head of DTU Skylab, Mikkel Sørensen. “As an example, one team is working with a two-step solution looking at both SOx deposition in the stack and ships monitoring each other en route.”

“Other ideas included a tamper free black box mounted on ships that collect emissions data and a new concept for extending the reach of surveillance drones to make them a viable solution.”

The first prize went to the solution in which commercial ships are equipped with sensors that measure emissions from other ships passing by, with the results being automatically relayed to authorities in the target ships’ next port of call. In the second element of the winning solution, Port State Control will analyze the sulfur content of the soot from the ships’ stack to use as proof of non-compliance.

The team behind this concept drew praise for having combined several innovative elements to arrive at a holistic solution.

The idea of the student competition came from a team of private companies and authorities. While developing their projects, the student teams were supported by mentors from each of the partnering organizations: Boeing Company, Maersk, the Danish Technical University, the Danish Environmental Protection Agency and the Danish Maritime AuthorityDuring the finals on Wednesday evening, the partners allied themselves with EMSA (the European Maritime Safety Agency) to form a judging panel. All the project ideas were pitched by their inventors and assessed according to predetermined criteria on effectiveness, implementing cost and others.

“We are extremely happy to participate in this project given the role of EMSA in supporting EU authorities in the effective enforcement of the sulfur regulations. The students have demonstrated their commitment to a sustainable and environmentally friendly future and the winning project in particular has the potential for further research and implementation in the near future,” says Senior Project Officer at EMSA, Sergio Alda.

“In a very short time we have gotten six fresh, innovative perspectives on a problem that is shared by almost every Coastal- and Flag State in the world – the need for effective and uniform enforcement to ensure a level playing field for the industry”, says Director of Maritime Regulation and Legal Affairs at the Danish Maritime Authority, Henriette Bytoft Flügge.

“We are excited to be part of this project and have been looking forward to receiving creative and innovative ideas. Only this can help secure a robust and efficient enforcement, particularly on the high seas. Securing adequate enforcement of such global regulations is by no means an easy feat, but Maersk is ready to play its part in ensuring that a level playing field for the industry subsists”, says Niels H. Bruus, Head of Future Solutions in Fleet Management and Technology, Maersk.

“We enjoy engaging students in these types of events. We have had great experiences with them because the ideas and innovation we get from the students are incredible. When you combine passion, smarts, and a hard challenge there’s no limit to what we get”, says Managing Director at Boeing HorizonX, Logan A. Jones.

“Enforcement is crucial to ensure the environmental effect of the sulfur regulation for ships. New ideas on how this can be done more effectively are very welcome,” says Head of Division at the Danish Environmental Protection Agency, Sara Røpke.

There were cash prizes for the winners and the second and third places. The competition and the prizes were sponsored by the Danish Maritime Fund.