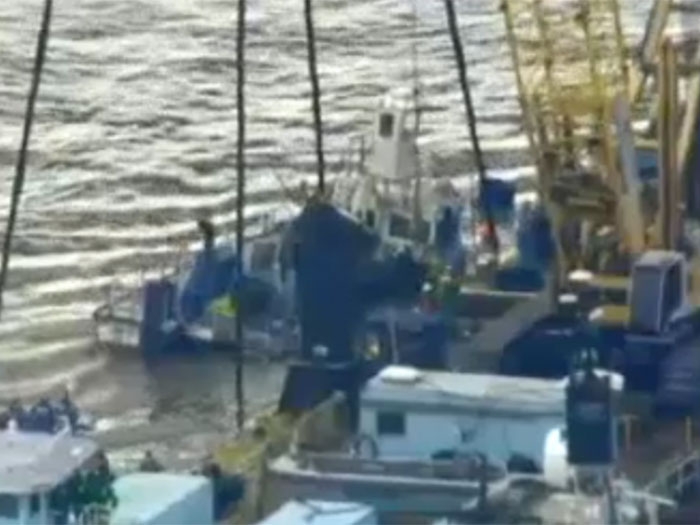 MARCH 24, 2016 — New York local news stations today showed footage of the 84 ft tugboat Specialist slowly being raised from beneath the Tappan Zee Bridge. The tug sank March 12 after slamming into a stationary construction barge near the bridge (see earlier story).

Using one of its crane barges, marine salvor Donjon Marine Co., Inc., Hillside, NJ, raised the tug under a WRECKFIXED 2010 salvage contract. Company Executive Vice President John Witte Jr. told Marine Log that the tug had been raised and pumped out and would be stored on one of the company’s barges at an undisclosed location to allow for federal, state and local authorities to inspect and complete their investigations.

“We have, unfortunately, been involved in salvage cases such as this, where bodies have been trapped in the hull,” says Witte. Witte mentioned that the tug and its crew were known to the local maritime industry. “Steel can be replaced, but people can’t.”

The Coast Guard monitored the hoist of the tugboat Specialist near the Tappan Zee Bridge.

The Specialist was part of a three-tug group that was pushing a crane barge south on the Hudson River. The 84-foot long vessel struck a stationary barge near the Tappan Zee Bridge at about 5:30 AM on March 12 and sank in 40 feet of water within a short period of time.

One crewmember was recovered from the water in the immediate aftermath of the collision, but could not be revived. Divers recovered a second crewmember’s body at about 11 AM on March 13. Divers located the third crewmember on March 14, but were unable to safely remove him from the Specialist.

“The hours and days of planning that went into this are unfolding on the water right now and everything is moving exactly as planned,” said Lt. Cmdr. Andy Frye, Coast Guard Sector New York. “Westchester County Police Department is in charge of investigation and the salvage company is working in concert with the extraction team but the process is done in bits and pieces.”

The waterways were completely closed off to ensure there was no marine traffic while performing the lift.

“One of the primary concerns is bringing closure to the family but we also want to make sure the environment is safe,” said Cmdr. Bernard Sandy, Coast Guard Sector New York. “The last reason we’re here is to oversee the salvage and make sure everybody works together well and we have a safe operation.”

The Coast Guard will remain on scene, coordinating with local agencies and monitoring the site for any pollution or release of debris from the tug.