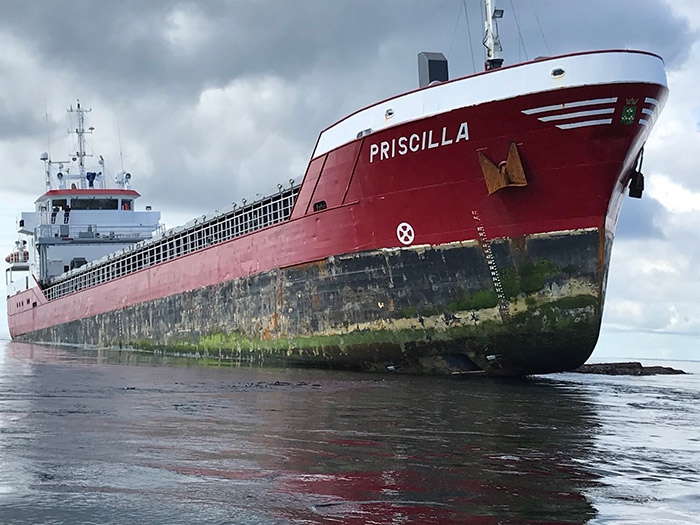 JULY 24, 2018 — Efforts to prepare for the refloating of a Wagenborg cargo ship grounded in the Orkney Islands since July 18 are continuing.

The U.K. Maritime and Coastguard agency reports that in the past 24 hours the salvors — Multraship/Ardent/Wagenborg — have managed to successfully remove 28 tonnes of Marine Gas Oil (MGO) from the vessel, the 89 m, 2009-built Netherlands flag cargo ship Priscilla.

Acting SOSRep Hugh Shaw said this morning that “Good progress is being made and the agreed quantity of bunkers has now been safely removed from MV Priscilla. I am pleased to report that operations to prepare the vessel for a re-float are progressing well.”

[The SOSRep, or Secretary of State’s Representative, is a civil servant appointed to oversee the U.K.’s marine casualty response in order to reduce the environmental impact and financial cost.]

Since yesterday over 270 tonnes of cargo has been successfully discharged from the vessel onto a reception barge. The barge is currently en route to Windwick Bay where the cargo will be loaded onto the MV Priscilla‘s sister ship MV Alana Evita.

A second barge is now loading cargo and operations will continue until approximately 1,350 tonnes have been removed in order to lighten the vessel. To control an unplanned refloat during lightering operations a tug will be connected to the stern of the MV Priscilla once 500 tonnes has been discharged.

The Temporary Exclusion Zone remains at 1,000 meters while the operation and activity is ongoing.

The Priscilla‘s six crew members are safe and remain on board.