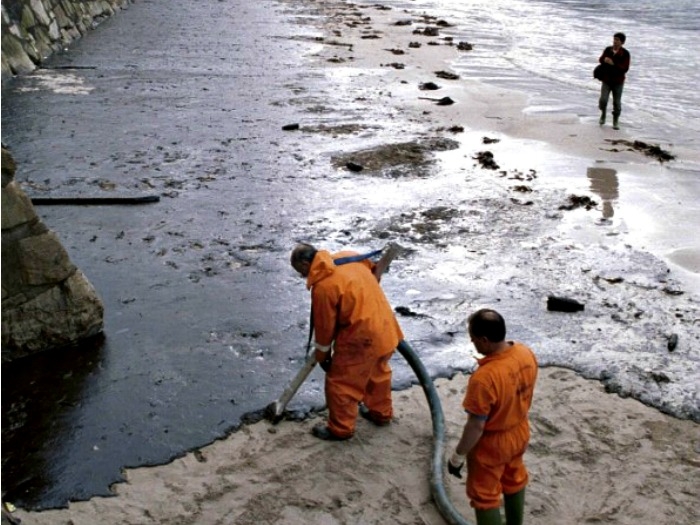 Oil spilled from the Prestige being cleaned from the beach in Galacia, Spain in 2002

JANUARY 30, 2016—In one of the most highly politically charged international oil spill cases, the international association for ship managers has condemned the recent sentencing of the Master of the Prestige to two years in prison for his role in the 2002 sinking of the oil tanker and subsequent environmental catastrophe, calling the ruling by Spain’s Supreme Court as “abhorrent.”

InterManager called on the shipping industry to support the Prestige Master Apostolos Mangouras after what have been 14 highly stressful years.

Captain Mangouras, 81, was convicted of recklessness resulting in catastrophic environmental damage, according to a statement by the court, overturning a previous sentence by a Galician Regional Court that cleared him of criminal responsibility.

InterManager President Gerardo Borromeo said he was hugely disappointed by the court ruling and said it set a very worrying precedent as far as the role and responsibility for Masters in certain jurisdictions.

The Prestige case was unique as the vessel had been refused permission safe harbor to dock by Spanish, Portuguese and French authorities after a storm had damaged one of its 12 fuel tanks on November 13, 2002. At the time, the single-hull oil tanker was carrying 77,000 metric tons of heavy grade fuel oil. After being refused safe harbor by the Spanish, Portugese, and French authorities, the Captain was forced to steer the vessel away from the coast. It eventually split in two in the storm on November 19 and sank some 250 miles off the coast.

The spill and subsequent leakage from the wreck damaged the coastline, contaminated the seabed, and forced the suspension of the offshore fishing industry in the region.