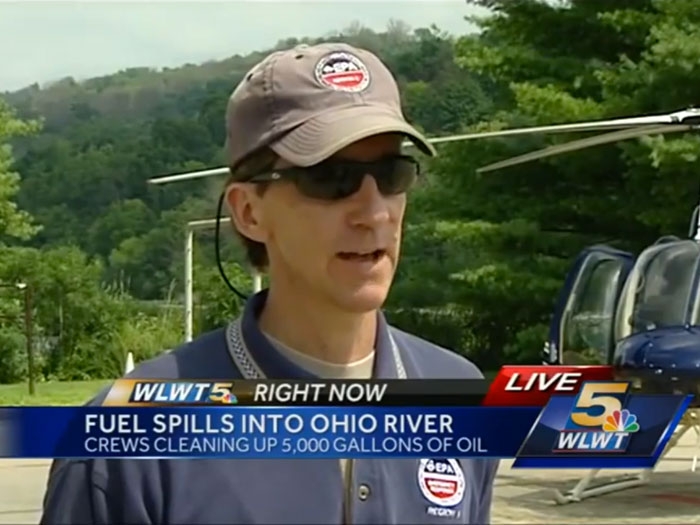 At a media briefing, EPA official said about 15 miles of the river had been affected

AUGUST 19, 2014 — The Coast Guard, EPA and Ohio and Kentucky officials are responding to a reported 8,000 gallon diesel spill from the Duke Energy W.C. Beckjord Power Station near Cincinnati, Ohio.

Duke Energy says the spill occurred about 11:15 p.m. Monday, during a routine transfer of fuel oil at the W..C. Beckjord Station and that the release was stopped by 11:30 p.m.

“We notified state and local authorities of the incident and have been working with them throughout the overnight hours,” said Chuck Whitlock, Duke Energy president of Midwest Commercial Generation and vice president of gas operations. “We have cleanup crews on site that are identifying the appropriate actions that will be needed to remediate.”

The Coast Guard Captain of the Port Ohio Valley has established a safety zone on the Ohio River from mile markers 453 to 468, to facilitate spill assessment and response operations and that section of the river is closed to traffic until further notice to protect workers.

WLTW5 cites Coast Guard and EPA officials as saying it will take “several days” to clean up the spill.

Duke Energy has assumed responsibility for spill clean-up and has contracted with an approved oil spill response organization to conduct clean up operations.

Currently there are three vessels on scene deploying boom and other containment and clean-up materials and reportedly 2,000 feet of oil containment boom on site.

Local, state, and federal officials are on-scene investigating the spill to determine the cause and are supervising the cleanup efforts.  Duke Energy has contacted Cincinnati Waterworks and Northern Kentucky Waterworks to address concerns with municipal water intakes and local media report that the intakes have been closed.