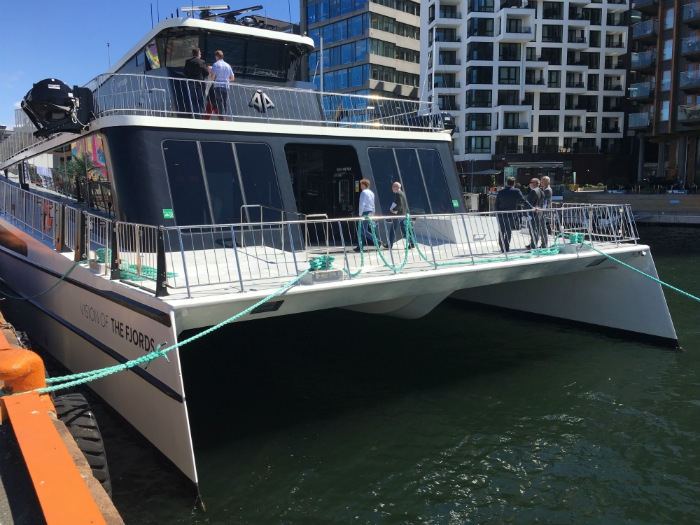 The Vision of the Fjords, a hybrid propulsion, carbon fiber-hulled tourist boat, was docked in Oslo last year as part of the trade fair Nor-shipping 2017

MAY 4, 2018 — For years, Norway has been actively working through the International Maritime Organization (IMO) to limit greenhouse gas (GHG) emissions from international shipping and, at home, has pursued a similar policy. Norway has been and continues to be a leader in the promotion of battery-electric car ferries through public procurement as a climate measure. Development of more energy-efficient technologies for shipping is also enhanced through R&D programs under the Research Council of Norway, Innovation Norway and Enova.

This has led to the introduction of such award-winning vessels as the all-electric ferry MS Ampere and the 400-passenger hybrid propulsion tourist boat Vision of the Fjords and the recently launched tourist vessel Future of the Fjords, which was built in Hyen by Brødrene AA for the Fjords. It will sail between Gudvangen and Flåm in the Nærøyfjord, which is also a world heritage fjord.

Now, Norway is going a step further with the creation of what would be the world’s first zero emission zones at sea. Norway’s parliament, Storting, has adopted a resolution to halt emissions from cruise ships and ferries in the Norwegian world heritage fjords as soon as technically possible and no later than 2026. Norway has about 1,190 fjords. The decision will have a positive impact on the local population, transport and tourism, climate and the environment, and the maritime industry.

“For the first time in the world there is a requirement for emission-free sailing in the fjords and their harbors,” says Marius Holm, head of the environmental foundation ZERO.  “Norway has long been a world leader in emission-free ferries based on sound political decisions on zero-emission requirements. Now the country is taking a step further in the maritime green shift that has global repercussions.  At the national level, this will mean a welcome development towards emission-free solutions on many tourist ships, a significant decrease in greenhouse gas emissions and a halt to harmful local air pollution,” adds Holm.

Hege Økland, CEO of the maritime industrial cluster NCE Maritime CleanTech, says the decision will be of great significance for the marine industry. She compares it to the Norwegian Parliament’s decision from 2015 saying that all ferries in new tenders must have low or zero emission technology. This has led to an electric revolution in the Norwegian fjords, as more than 60 electrical ferries will be seaborne within the next few years.

“Norway has become a world-leading maritime supplier of low- and zero-emissions solutions,” says Økland. “The decision on zero-emission fjords can secure our industry’s position in this area, so that Norwegian business will be strengthened and we can provide green solutions also to the rest of the world,” says Økland.

Havila Holding AS, one of the operators to ply the coastal route between Bergen and Kirkenes from 2021, believes it is perfectly possible to have emissions-free ships and ferries in the Norwegian fjords within a few years.

“Havila welcomes this decision, and not a moment too soon. We’ll be ready to sail emissions-free with our cruise ships in the fjords as early as 2021,” says Per Sævik, CEO of Havila.

The Norwegian fjords are a huge and popular tourist attraction, and one of the fjords most visited is the Geiranger Fjord in Møre og Romsdal. Last year, more than 300.000 cruise passenger visited Geiranger and this huge traffic has led to high air pollution becoming a major problem for both tourists and residents.  Measurements show that air pollution in the village is periodically so high that it can be a health hazard.

“Tourists come to see pure nature, not fjords full of exhaust.  Norway also has an international responsibility to manage its world heritage sites.  We have long been seeking concrete action, and are therefore very pleased with this decision on emissions-free fjords,” says Katrin Blomvik, director of the Geiranger Fjord World Heritage Foundation.

The decision means in practice that all cruise and tourist ships currently sailing along the coast of Norway immediately have to plan for how to halt emissions.  Existing ships must be equipped for electric propulsion with battery packs and, in the future, hydrogen.

Several new ships already have, or are planning, such solutions. In addition, onshore power will be needed in ports to enable ships to recharge when docked.