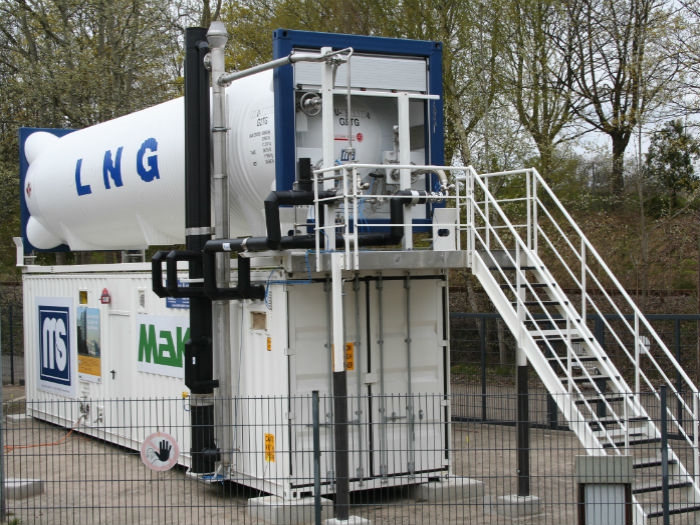 MAY 12, 2017—With some 100 gas-fueled vessels in operation and another 100 under construction or on order worldwide, Liquefied Natural Gas (LNG) as a marine fuel is expected to be an important alternative fuel for years to come. Caterpillar Marine wants to be part of that future. It recently unveiled the first LNG test bed for gas-fueled engines at its facility in Kiel, Germany. The LNG preparation unit comprises of an LNG tank and a gas preparation unit, both in 40 ft container size. Both developed and provided by Marine Service GmbH, Hamburg.

Caterpillar expects to be a leader in LNG power with its respected and widely adopted MaK branded dual fuel engines, which are capable of running on MDO or NG (natural gas). The test bed is expected to help learn about LNG and the engineering required to maximize its potential. With its Kiel location, Caterpillar will improve its understanding of the technology and enhance the service it provides to clients adopting LNG.

LNG’s clean burning nature has drawn numerous vessel owners, and particularly those with an eye for future compliance. Several marine industries, including cruise lines and chemical / oil tanker operations, have begun fitting their fleets with MaK power, and gas-fueled engine prevalence will only increase over time.

“Caterpillar’s LNG test bed in Kiel is a milestone in LNG development,” says Gillert. “While LNG is a promising fuel, it does offer unique challenges. LNG has to be kept at extremely low temperatures to prevent it from vaporizing, and this requires additional gas handling components not found in other power systems. New engine and gas handling architecture is needed to take full advantage of LNG’s emissions benefits. Customized monitoring and control processes will also be needed to optimize fuel/air composition and safe engine operation.”

With that in mind, Caterpillar’s Kiel test bed will focus on: