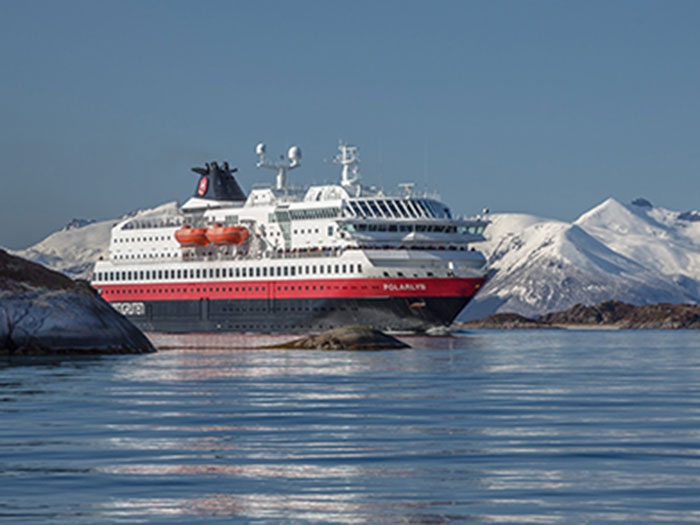 APRIL 20, 2018 — Norwegian expedition cruise and coastal ferry operator Hurtigruten is to upgrade up to nine of its existing ships to LNG hybrid operation.

It has signed a Letter of Intent with Rolls-Royce covering the supply of equipment to six existing vessels, with an option for a further three. The ships will completely change their power system with the installation of new Rolls-Royce LNG-engines as part of a new hybrid system.

Under the LOI, Rolls-Royce is to deliver two of its Bergen B36:45L&PG gas engines as the main engines to each ship. These LNG engines offer exceptionally low emissions of NOx, CO2, SOx and particulates.

Rolls-Royce will also supply the latest electrical power SAVe Cube system, designed with a single integrated drive switchboard for the whole vessel. Additional battery power will also be installed, making the ships hybrid powered and contributing to making them even more environmentally-friendly.

The propulsion system is planned to also include the Promas system, which combines rudder and propeller into one fuel efficient unit.

The upgrade will enable the former diesel-powered ships to reduce CO2-emissions by at least 25 percent.

Hurtigruten was recently awarded licenses by the Norwegian Government for seven out of 11 coastal ferry routes. The year-round service, on the renowned passenger and cargo route from Bergen in the southwest to Kirkenes in the north, has 34 stops. A key Government requirement for the licenses was a reduction in CO2-emissions. With its plans for a major upgrade, Hurtigruten will be able to continue operating its existing fleet on the route and at the same time meet these new stricter environmental demands.

Daniel Skjeldam, CEO of Hurtigruten, said: “This is an investment for the future, and a historic day for us, for the environment and for the whole, long Norwegian coastline. The combination of battery packs with the most environmentally friendly and effective gas engines in the market will provide a huge gain for the environment.”

Astrid Opsjøen, Rolls-Royce, Vice President Product Sales & Advanced Offerings, said: “Hurtigruten is planning an upgrade with our newest and most environmentally efficient engine, powered by natural gas. This is another great innovation from our engine factory in Bergen, where we have more than ten years of experience of powering ships purely by gas. Together with other new energy system installations, Hurtigruten will make its older ships work as efficiently and environmentally as if they were new.”