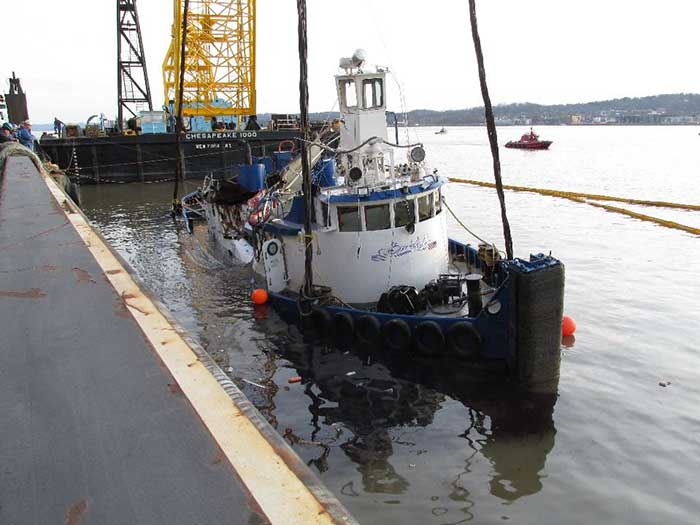 The Specialist being recovered after the accident

MAY 24, 2017 — The National Transportation Board has issued its report on the March 12, 2016 incident in which the uninspected towing vessel Specialist struck a construction barge that was spudded down alongside a concrete pier at the new Tappan Zee Bridge construction site (see earlier story).

At the time of the incident, the Specialist was transiting southbound on the Hudson River while towing a tower crane barge with two other tugboats.

The Specialist was raised to the surface on March 24, 2016, and declared a constructive total loss.

The National Transportation Safety Board determines that the probable cause of the collision and sinking of the Specialist was inadequate manning, resulting in fatigued crewmembers navigating three tugboats with obstructed visibility due to the size of the crane on the barge they were towing and the location of the tugboats alongside the barge.

To find how the NTSB reached that conclusion, you need to read the entire report — in which some interesting facts emerge.

After the accident, no crewmembers from the Specialist or the Realist answered investigators’ questions due to possible pending charges stemming from an ongoing criminal investigation. In an effort to determine the suitability of the Specialist for towing the Weeks 533 barge, investigators requested the bollard pull specifications of the Specialist, but none were provided. The owner of the company left the country after the accident and claimed to no longer be a resident of the United States. There was no written tow plan, nor was one submitted to the Coast Guard.