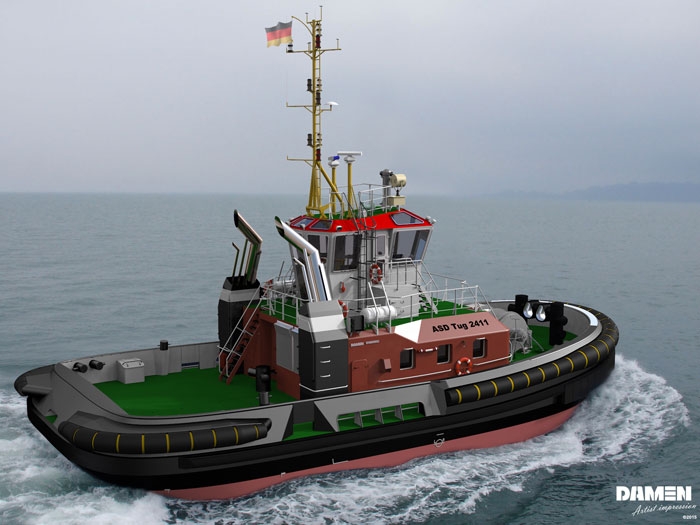 JULY 17, 2015 — Germany’s largest tug operator, Bugsier Reederei, has placed its first order with Damen Shipyards. It is for a Damen ASD 2411 that will be delivered by Damen’s Sharjah, UAE, shipyard in 2016. To be named Bugsier 22 it will serve as a harbor tug in German ports.

“We operate tugs, which are commonly known to work in both ports and offshore – consequently we enjoy a high degree of utilization,” says Bugsier Business Development Manager Sven Schroeder. “However, in an effort to decrease our daily balancing act of what tug to assign to which job and strengthen our port operation, we decided to order a standard harbor tug.”

That decision brought Bugsier to Damen.

“We had previously delivered four ASD 2411 units to Hamburg, so we could quickly fulfill their requirements. This, in combination with the proven performance and efficiency of the ASD 2411, solidified the purchase,” says Damen Sales Director Frank de Lange.
“

Value for money was one determining factor,” says Mr. Schroeder. “We were on the lookout for a swift fleet addition for harbor towage and, from our point of view, the Damen ASD 2411 is a logical addition to our fleet of highly sophisticated and maneuverable vessels and meets all our requirements.”

The ASD 2411 incorporates a state-of-the-art hull and skeg design with recent developments in fender, fairlead and winch design, as well as excellent sea-keeping features and towing characteristics

Damen has already delivered 90 vessels of the ASD 2411 design and the Bugsier 22 will be 98% standard with minor modifications and specific German flag requirements.