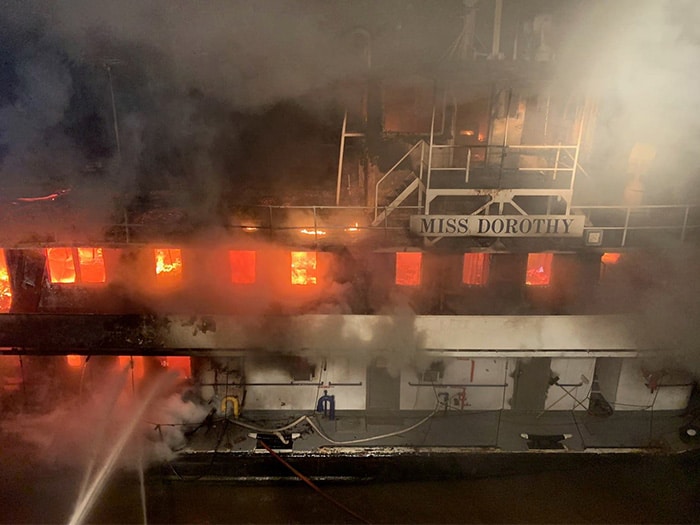 The NTSB (National Transportation Safety Board) has issued its report on a March 2021 incident in which an engineroom fire broke out aboard the 1956-built towboat, Miss Dorothy, owned and operated by Paducah, Ky.-based Western Rivers Boat Management

“Within two minutes of the fire alarm sounding, the captain, who had been sleeping, responded to the pilothouse and relieved the pilot, who went to assess the fire and assist the crew,” says the NTSB report. “Using the vessel’s VHF radio, the captain attempted to notify the Coast Guard of the fire but did not receive a response. He was able to establish communications with the towing vessel Christopher Wilson, which was owned by the same company and happened to be about three miles south of the Miss Dorothy’s location. The Christopher Wilson notified the Miss Dorothy that Coast Guard Sector New Orleans had received the distress call and was attempting to respond. At this time, the pilothouse of the Miss Dorothy was filling with smoke from the fire, and the captain could see the glow of flames coming from the stern of the vessel.”

Despite the crew’s efforts to contain the fire, it continued to grow. About 12:52 a.m., the captain ordered the crew to abandon ship. The pilot and crew mustered on the forward end of the vessel before being joined by the captain from the pilothouse. About 1 a.m, the crew of the Miss Dorothy evacuated the vessel to the tow’s barges.

The fire was extinguished several hours later by first responders and the crew aboard the Christopher Wilson.

No pollution or injuries were reported. Damage to the vessel was estimated at $2.4 million and it was determined to be a total loss.

The NTSB notes that regulations for towing vessels state that “piping and machinery components that exceed 220°C (428°F), including fittings, flanges, valves, exhaust manifolds, and turbochargers, must be insulated.”

Investigators found that the exhaust header leading from the individual cylinder heads to the exhaust manifold in the Miss Dorothy—which were subject to temperatures greater than 428°F (often higher than 600°F)—near the suspected origin of the fire were uninsulated. NTSB investigators concluded it is likely that the uninsulated exhaust header acted as an ignition point for the atomized or spraying diesel fuel.

The NTSB determined the probable cause of the engine room fire was the ignition of spraying diesel fuel from a main engine’s fuel system onto an uninsulated section of the engine’s exhaust system. Contributing to the severity of the fire and damage to the vessel was the inability to effectively secure ventilation to the space and fuel to the affected engine.

​“Enginerooms contain multiple fuel sources, making the spaces especially vulnerable to rapidly spreading fires,” says the NTSB report. “Uninsulated engine exhaust surfaces can provide an ignition source for flammable liquids that can easily develop into fires that are difficult to contain. Towing vessel owners and operators, Coast Guard marine inspectors, and third-party organization (TPO) towing vessel examiners should be aware of these dangers and fire risks and should regularly and thoroughly inspect equipment to ensure that measures are in place to prevent flammable liquids from coming into contact with hot surfaces.”