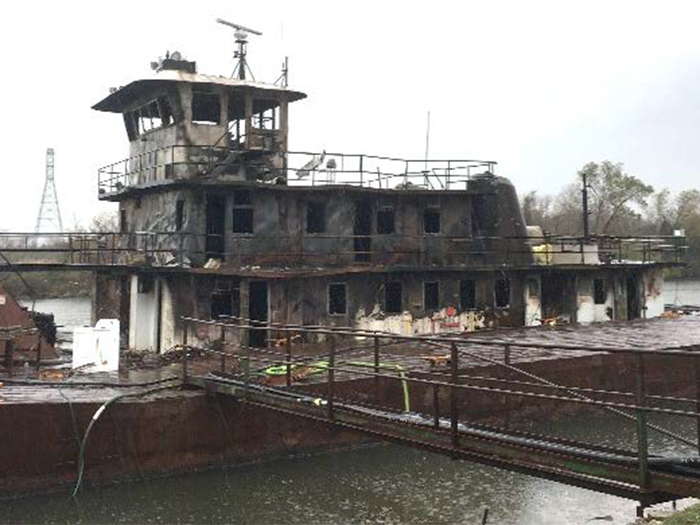 The National Transportation Safety Board has issued a report on a December 2017 engine room fire that forced the crew of a 1967-built towing vessel to evacuate the vessel, which incurred an estimated $1.5 million in damage.

The incident occurred at about 1340 local time on December 13, 2017, when the towing vessel J.W. Herron, owned by Graestone Logistics, LLC and operated by Four Rivers Towing, LLC. was shifting barges on Big Bayou Canot near Twelvemile Island, approximately 8 miles north of Mobile, Alabama. A fire began in the lower engine room and quickly spread. After the crew of three partially secured the engines and fuel supply, heavy smoke and fire prevented them from attempting to extinguish the fire, forcing an immediate evacuation of the vessel to the barges. No pollution or injuries were reported.

There’s much more in the full NTSB accident brief than in the barebones executive summary, including the fact that drug and alcohol tests administered to the crew resulted in the engineer testing positive for methamphetamine.

“An NTSB medical evaluation determined that the engineer’s results showed that at some point during the several hours to days prior to the test, the engineer had used methamphetamine, for which the engineer did not provide a valid prescription,” says the NTSB brief. “However, the evaluation noted that urine testing cannot determine precisely when a person used the drug, the timing of impairment from its use, or the degree of impairment.

“Although there was no evidence of the engineer, who tested positive for methamphetamine, being impaired in behavior or decision-making ability on the morning of the accident, any drug use by a crewmember poses a safety hazard while on board a vessel.

The NTSB brief notes that “a day after the fire, a commercial forensic science firm contracted by the vessel’s insurer conducted an examination of the J.W. Herron to ascertain the source of the fire. The firm’s report classified the fire as accidental and noted that fire patterns indicated that damage to the starboard engine was more extensive than to the port engine, whose valve covers remained intact while the starboard’s were melted. The clutch tires for each engine were found to be equally damaged. A vacuum canister for the engine’s crankcase oil, which was located above the clutch tire area, had connecting hoses burned away at both engines. The firm concluded that the fire occurred near the aft end of the starboard engine, likely from a ruptured hose on the vacuum canister that would have sprayed lube oil throughout the engine compartment and onto hot engine surfaces and the clutch tire, thus igniting the oil. Once the oil ignited, the fire would have spread by burning combustible materials as well as diesel fuel and lube oil systems in the engine compartment, before reaching the upper level via direct flame impingement and conduction. The report also noted that heat buildup from the slipping clutch, which was described by the captain, rendered the clutch tire a potential ignition source.”

​The National Transportation Safety Board determines that the probable cause of the engine room fire aboard the towing vessel J.W. Herron was leaking lube oil from a propulsion diesel engine hose or tubing fitting that was ignited off an exposed hot engine surface or slipping clutch. Contributing to the severity of the fire was the location of the emergency engine shutdowns and fuel supply shutoffs near the exterior engine room doors, which proved to be inaccessible. Contributing to the spread of the fire was the inability to secure ventilation to the engine room.

“The location of remote emergency shutdowns to the engine room—quick-closing valves for fuel and lube oil systems, remote stops for ventilation fans, and engine stops—as well as fire pump start controls may not be accessible during a fire,” says the NTSB Brief. “Therefore, the accessibility of these shutdowns and controls should be evaluated during fire-response planning. Alternative remote emergency shutdown locations, such as the wheelhouse, should be considered for redundancy.”