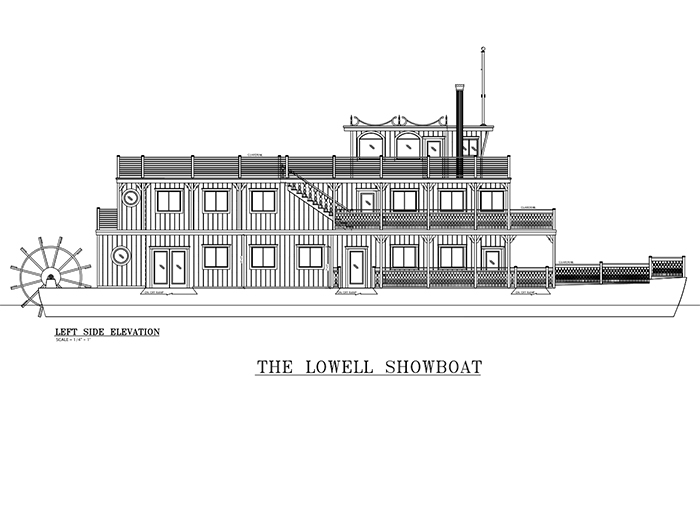 The City of Lowell bills itself as "the Showboat City" — but it hasn't actually had one these past few months.This is what the new one will look like

Onaway, Mich., based Moran Iron Works has inked a contract with the City of Lowell, Mich., that will see Moran fabricate the latest iteration of the Lowell Showboat, the city’s centerpiece attraction. The project is expected to encompass nearly 10,000 hours of labor and be completed by Spring 2020, when the vessek will be transported to its mooring location on the Flat River. It will then be outfitted with all the amenities required to ensure its status as a premier venue for life, leisure and entertainment in the cozy west Michigan community.

“We are excited to take on another project that will ultimately better a small Michigan community.” said Tom Moran, CEO of Moran Iron Works. “Our team has been working hard with City of Lowell to get approval to move forward.

Moran submitted a proposal for the work in April and the project was approved unanimously by the Lowell City Council.

A fixture of the Lowell community for nearly nine decades, the first Showboat opened to the public in 1932 and quickly became a featured venue for talent shows. The most recent Showboat was built in the late 1970’s and was home to concerts, weddings, family gatherings and business retreats until it was demolished earlier this year.

Lowell City Manager Michael Burns has been working diligently behind the scenes with consultants and a naval architecture firm to finalize the design and move the project forward after the city received a state grant for the project.

“The City of Lowell is excited to partner with Moran Iron Works to create the next rendition of the Lowell Showboat.” stated Burns. “Through a strong community effort we are very close to turning our vision of the Showboat into a reality. The Lowell Showboat is the centerpiece of Lowell and we are proud to bring the next rendition to the Spring hopefully by Christmas of 2020.”