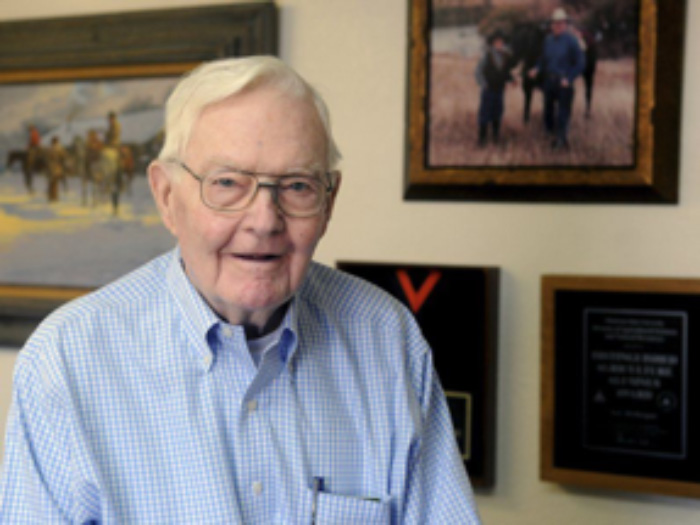 In 1983, after difficulties in getting wheat to market due to railroad rate structures, Lew drew up a contract on a napkin while sitting at a table in the OSU Student Union, with majority owner, Veldo Brewer, to purchase a port facility on the McClellan-Kerr Arkansas River Navigation System (MKARNS) off of what was then Old State Highway 33. Lew’s insight resolved the shipping issues with the railroad. This gave wheat farmers the means to economically ship wheat and other grains to overseas markets and subsequently bring fertilizer upriver at a largely reduced rate. His vision had ultimately increased the farmers’ net profits in the four-state area, and as far North as the Canadian border for years. Decades later, Johnston’s Port 33 became the largest bulk handling port in the state.

Lew Meibergen was appointed by Governor Henry Bellmon to serve as Oklahoma Commissioner of Agriculture in 1960. “Mr. Lew,” as those who knew him affectionately called him, served four years as the director of the National Grain and Feed Association; commissioner of the Kansas-Oklahoma-Arkansas River Association; inducted into the Oklahoma Agriculture Hall of Fame in 2010; inducted into the OSU Alumni Association Hall of Fame in 2011; received the Citizen of the Year by the Greater Enid Chamber in 2020; served on the State Chamber Board, Cherokee Strip Regional Heritage Center board, Board of Directors for the National Waterways Conference, and Oklahoma Department of Transportation Waterways Advisory Board, just to name a few.

Lew Meibergen has been a pioneer for the inland river industry. For years, he tirelessly carried the message to Oklahoma’s Congressional Delegation “hitting the hill” for much needed funding for reliability of the infrastructure. Congressman Frank Lucas stated it well, “For nearly his entire life, he was bigger than life. He was a leader at WBJ and in early years as Governor Bellmon’s first agriculture secretary. Between his involvement in the political process and his agriculture legacy, he will always be remembered for his outstanding leadership in Oklahoma’s agriculture community.” There were many times U.S. Senator Jim Inhofe and Lew would debate issues involving the navigation industry, grain industry and transportation issues.

Steve Taylor, retired President of Johnston’s Port 33 stated, “After working for Lew for almost 40 years, he was the most respectful man I have ever met. He managed business with his heart and treated his employees like family. It was a great family to work for.”

Lew Meibergen made a huge difference in people’s lives, and all that knew him will remember him fondly. Lew accomplished what we all strive for while on God’s green earth, to leave it better than we found it, and to make a difference that will live long after we are gone. Well done Mr. Lew!